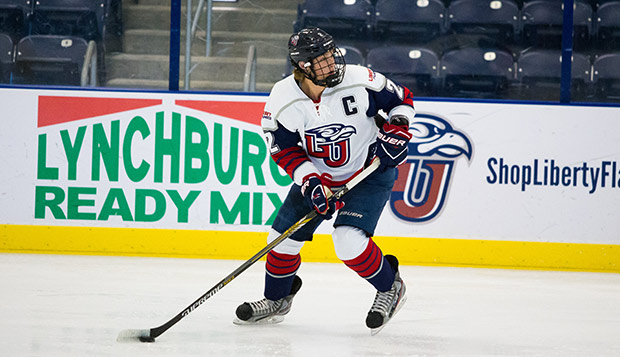 Liberty sophomore defenseman and head captain Jackson Roy looks to make an outlet pass at the LaHaye Ice Center, where the Flames host Ohio this weekend. (Photo by Jessie Rogers)

The Flames (14-6) jumped out to a 2-0 lead against the Broncs (13-8-1), sparked by a goal by junior forward Eric Masters at the 12:05 mark off an assist from senior center Matthew Perri. Freshman forward Blake Flanders netted the second score, assisted by senior forwards Marshal King and Paul Lamoureux with 8:31 remaining in the first period.

Rider's Christopher Johnson and Cole Moskai answered with unassisted goals in the second period to tie the contest at 2-2. Johnson completed his hat trick for the Broncs with the go-ahead and winning goals in a span of 2:30 late in the third period before Masters trimmed the deficit to one by finishing feeds from sophomore center Caleb Toone and Perri with 3:29 remaining in regulation.

Junior goalie Blake Scott (8-2) made 29 saves for the Flames, who return to the LaHaye Ice Center this weekend for their last two home games of the regular season against Ohio (16-10) on Saturday at 10:30 p.m. and Sunday at 2 p.m.

Liberty will then travel to the Berglund Center in Roanoke on Feb. 10 to face Virginia Tech at 2 p.m. in the deciding game of the best-of-three Battle of the Blue Ridge before attempting to defend its first Mid-Atlantic Collegiate Hockey (MACH) Tournament championship, Feb. 16-18 at Rowan (N.J.) University.

The Flames are no longer in contention for one of the top two teams in the Southeast Region rankings, which receive autobids to the ACHA DII National Championships in Columbus, Ohio. However, with two wins against the Bobcats, Liberty could clinch the top seed in the Southeast Region tournament, which it will host for the second time in four seasons from Feb. 23-25.