Flames rally from three goals down to defeat Blue Hens, 7-4 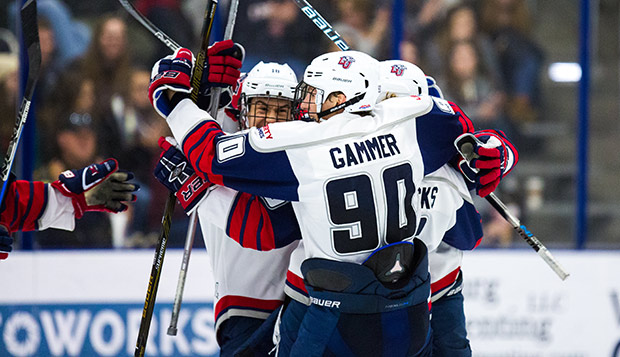 Liberty University's ACHA Division I men's hockey team scored six unanswered goals, including four on the power play, to erase a 4-1 second-period deficit and complete a sweep at defending ESCHL regular-season champion Delaware with a 7-4 victory, Saturday at the Fred Rust Arena in Newark, Del.

The Flames (22-6, 17-2-1 ESCHL) stretched their winning streak to 11 games as they concluded ESCHL regular-season play. For the weekend, Liberty converted eight of its 12 power-play chances, after going four for four in Friday's opener, which clinched the ESCHL regular-season title and lone autobid to the ACHA DI National Championships, set for March 8-13 in Columbus, Ohio.

"That's a fantastic achievement," Liberty Head Coach Kirk Handy said of the Flames scoring on two-thirds of their man-advantage opportunities. "It's always key to win the special teams opportunities and today, our penalty kill was 100 percent. They were 0 for 5, we were 4 for 8. Games like this come down to special teams, and our power play and PK had the biggest impact on tonight's outcome."

Senior forward Grant Garvin, who leads ACHA DI scorers with 55 points and paces the Flames in scoring for the third-consecutive season, sophomore linemate Brock Thompson, and freshman forward Cole Gammer each scored twice after sophomore defenseman Josh Bergen netted the equalizer to start Liberty's scoring midway through the first period with a blast from the point off assists from Garvin and Thompson.

Delaware (15-15-2, 8-11 ESCHL) had seized a 1-0 lead less than five minutes after the opening faceoff and extended it to 2-1 by capitalizing on a turnover in the Flames' defensive zone with 7:10 left in the first period before scoring twice more early in the second period.

"When we went down, we called time out, because while we had had some misfortunate bounces, we weren't working smart enough," Handy said. "It's a credit to the guys that they were able to reset. … I was proud of the guys' resilience to battle."

Garvin sandwiched two power-play goals around a Gammer score on a four-on-one rush as the Flames came storming back to tie the game at 4-4 going into the third period.

Thompson then netted the go-ahead and insurance scores on a one-timer with 15:40 remaining in regulation and a slap shot with 11:33 to play.

"I am super proud of Brock, who worked hard in the offseason and has elevated his game as the season's gone on," Handy said. "He leads by the way he competes and it has been great to see."

Gammer capped the scoring by converting on another odd-man rush at the 5:00 mark and junior goalie Josh Halpenny recorded the win between the pipes.

"He made some key saves for us," Handy said. "We were down 4-1 and trying to battle our way back in and Josh kept us in the game. All year we've had great goaltending."

The Flames will return to the LaHaye Ice Center to host Western Michigan on Friday and Saturday at 7 p.m.

"We're growing as a team, becoming more mature in the way we play, but still have a lot of opportunities to improve," Handy said. "We want to get better every day." 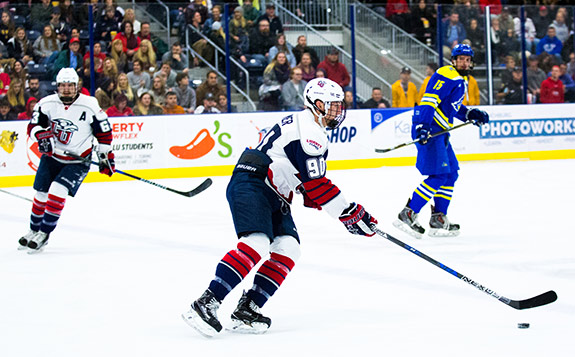 Cole Gammer skates the puck out of the D-zone against Delaware. (Photo by Andrew Snyder)