Flames cash in on power play for ESCHL regular-season title 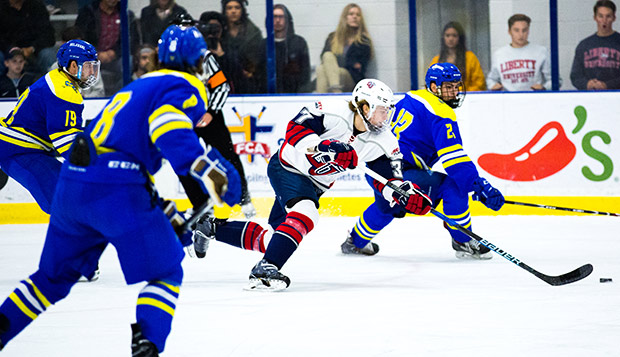 Flames sophomore forward Victor Blomberg scored the first goal against Delaware on Friday and added the second of three on a five-minute power play at the end of the second period. (Photo by Andrew Snyder)

By capitalizing three times on a five-minute penalty at the end of the second period, Liberty University's ACHA Division I men's hockey team pulled away from defending champion Delaware and clinched its first ESCHL regular-season championship for an 8-5 victory, Friday night at Fred Rust Arena.

The Flames (21-6, 16-2-1 ESCHL), who won the ESCHL Tournament title in their first season in the league last year, also received the conference's lone autobid to the March 8-13 ACHA Division I National Championships in Columbus, Ohio.

"One of the goals we had at the start of the year was to get that regular-season title," Liberty Head Coach Kirk Handy said. "We didn't get it last year and really wanted it this year. We want to celebrate this one tonight, but we've got a big one (Saturday) to continue on this journey."

Liberty had to overcome an early 1-0 deficit after the Blue Hens scored in the opening two minutes. Sophomore forward Victor Blomberg netted the equalizer off an assist from freshman forward Ryan Cox with 14:42 left in the first period. Sophomore defenseman Garrett Nelson, playing in his first game back from an injury in early November, netted the first of the Flames' four power-play goals to lift Liberty to a 2-1 advantage at the 10:13 mark.

Junior defenseman Zane Schartz extended Liberty's lead to 3-1 before Cox deflected in Blomberg's shot from the point to make it 4-1 with 1:20 to go in the first period.

Senior forward Tim Bierema stretched Liberty's lead to 5-1 at the 12:36 mark of the second stanza before Delaware netted a power-play goal with 6:11 to go and another at even strength with 3:41 left, drawing within 5-3.

That's when a Blue Hens player was given a five-minute major for a hit to the head of Flames freshman transfer Devin Pierce, who was injured on the play and missed the rest of the contest. Liberty retaliated by putting the puck in the back of the net three times in the final 1:31 of the period to regain control of the contest. Sophomore forward Josh Hamilton sandwiched two goals around a second score by Blomberg on a deflection to take an 8-3 lead into the second intermission.

"The power play was a big part of the game tonight," Handy said. "It was big for us to capitalize on those plays. (Pierce's injury) was a tough play to watch happen, but our guys responded the right way."

The Blue Hens rallied with the only two goals of the third period off Flames junior goalie Cole Burack, but could not cut the deficit any closer.

"I'm proud of our guys," Handy said. "They've been working since August toward the goal to be the ESCHL regular-season conference champions. This is one goal down and our hard work continues on for other goals we have for this program."

The Flames and Blue Hens will meet again at 5:25 p.m., Saturday. The game will be webcast live on Delaware hockey's Facebook page.