No. 13 Flames hope to clinch ESCHL title at Delaware 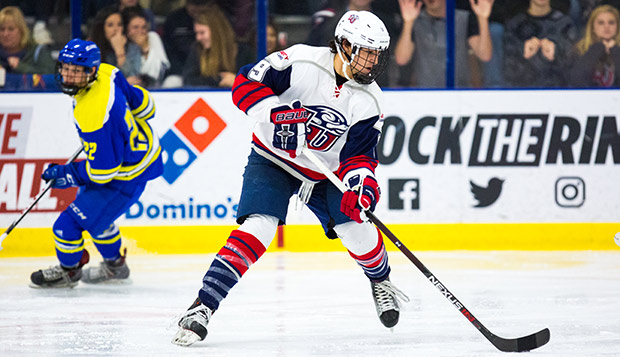 Sophomore Brock Thompson currently has recorded 20 goals and 22 assists for the Flames.

In only its second season as a member of the Eastern States Collegiate Hockey League (ESCHL), Liberty University's ACHA Division I men's hockey team can clinch the regular-season title and autobid to the March 8-13 ACHA DI National Championships in Columbus, Ohio, with a win on Friday at defending ESCHL regular-season champion Delaware.

The Flames — who took a 10-game winning streak into last year's nationals after dethroning four-time champion Stony Brook to claim the ESCHL tournament crown in their first year in the league — have won the first four contests of 2018 to stretch their run of success to nine games. Liberty is 9-1 on the road this season and 13-5 at home, having outscored opponents 140-55, including 46-13 away from the friendly confines of the LaHaye Ice Center.

The Flames must adjust to the Olympic-sized ice at Delaware's Fred Rust Arena for this weekend's series against the Blue Hens.

Liberty scouting report: The Flames feature the top scoring line in ACHA Division I, paced by senior alternate captain Grant Garvin (18 goals, 34 assists), who moved into the individual lead with 52 points. Garvin and sophomore linemates Brock Thompson (20G, 22A) and Quinn Ryan (11G, 24A) have combined for nine game-winning goals while junior defenseman Zane Schartz (17G, 29A) leads the way with 10 power-play scores.

"The guys are playing great right now," said NCAA Division III transfer center Devin Pierce, who plays on the same line as fellow freshmen Cole Gammer (9G, 19A) and Jordan Bochinski (10G, 8A). "We just need to keep the momentum going into Delaware with two big games there. Our speed is going to be huge and just doing the little things right."

Delaware scouting report: The Blue Hens are coming off a split with Stony Brook at home, where they are 8-4 on the season. The team features a new coaching staff this year, led by John Donahue, Delaware's third head coach in four seasons since capturing its first national title in 2012.

Cole Zucker, a 6-foot, 3-inch center who ranked second last season, is the Blue Hens' scoring leader with 13 goals and 28 assists, followed by Michael Nisky (10G, 23A) and fellow forwards Chris Mazzella (14G, 14A) and Shane Mullin (19G, 7A), who has racked up a team-high eight power-play goals, four game-winners, and 101 penalty minutes.