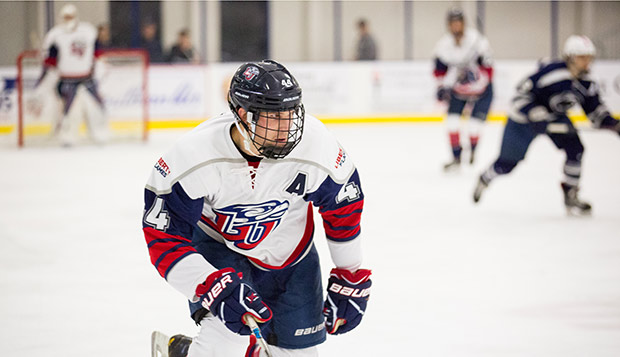 Freshman forward Matthew Perri lifted Liberty to an early 1-0 advantage, skating the puck in from the left boards before lifting a wrist shot inside the right post just two and a half minutes after the opening faceoff.

Ten minutes later, Perri started a fast break by skating the puck out of the defensive zone on a restart and sent a pass to freshman forward Blake Flanders to Liberty's second score. Perri skated toward net and deflected Flanders' shot from the top of the right circle past Terrapins goalie Travis Danko.

Liberty stretched its lead to 3-0 just 15 seconds later when Flanders worked the puck to Perri in the right crease, where Perri skated beyond the end line and slipped a pass back into the left crease for senior defenseman Ryan Sidun to finish into an open net.

Maryland trimmed the deficit to 3-1 on the power play with 16:57 left in the second period before Liberty capped the scoring 37 seconds later on freshman defenseman Kyle Martin's shot from the top of the right circle that trickled through the five hole.

Liberty was coming off a 4-0 victory over Delaware (17-10) on Sunday afternoon at the LaHaye Ice Center.

Senior forward Paul Lamoureux started the scoring in that contest with a power-play goal at the 8:05 mark of the first period, off a cross-crease assist from Flanders, who had received a backhanded pass from sophomore forward Drew Crilly.

Senior defenseman Sean Bakker set up Flanders for the Flames' second goal, off a shot from inside the right circle that popped up off the glove of Blue Hens goalie Stephen Odgers before bouncing off his back and into the net.

Crilly extended Liberty's lead to 3-0 with a power-play goal in the final 24 seconds of the first period by whipping a powerful wrist shot from the high slot inside the left post.

Senior forward Marshal King finished off a Flames fast break, chasing down a puck that rolled in front and sending a swift backhanded shot under the pads of the diving Odgers with 5:08 remaining in the second period.

Flames junior goalie Blake Scott earned his first shutout against Delaware before improving to 9-1-1 on the season with the win over Maryland.

The Flames take to the road for the first time in the spring semester with games at Rider on Saturday at 8:30 p.m., and Stevenson on Sunday at 6 p.m., before closing out the regular season at home against Ohio next Friday at 10:30 p.m. and Saturday at 2:30 p.m.