Wrestlers ready to rumble in the rink at NCWA National Duals 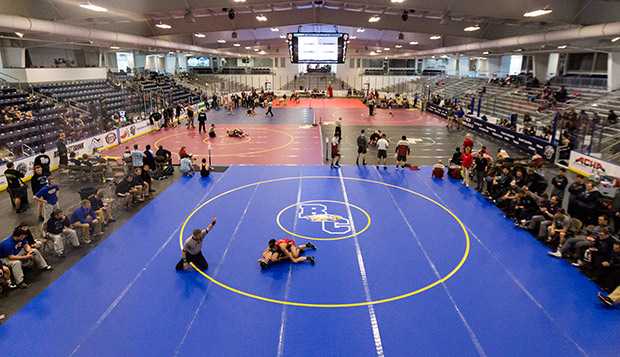 The LaHaye Ice Center will again be transformed into a wrestling arena Thursday to prepare for Friday's and Saturday's event.

As runner-up at last year's NCWA National Duals, which it hosted for the first time at the LaHaye Ice Center (LIC), and at the Jan. 12-13 Virginia Duals in Hampton, Va., Liberty University's men's wrestling team is seeded second for this weekend's 16-team tournament, which starts Friday at 10 a.m.

Liberty is hosting the event for the second year at the LIC after a six-year run in Dalton, Ga.

"It's a great venue, the perfect size for an event like this, and pretty cool, too, to have it in an ice arena," Liberty Head Coach Jesse Castro said, noting that a high-tech material will be used to cover the floor on Thursday morning to insulate the mats from the ice.

This year, the field is limited to the top 16-ranked teams in the nation.

"It should be more competitive than last year because all the teams coming are bringing full lineups," Liberty Assistant Coach Chris Williamson said. "It's the first half of our national championships."

Teams will be awarded as many as 24 points to go toward the March 8-10 NCWA Grand National championships in Allen, Texas., with the runner-up receiving 23, the third-place finisher 22, and so on.

The Flames are seventh in the latest NCWA team rankings, behind top-ranked Central Florida, which is also the top seed for this weekend's tournament, but ahead of defending NCWA National Duals and NCWA Grand Nationals champion Emmanuel, ranked 12th and seeded fourth.

"We have a more balanced lineup this year and we are ready," Castro said. "We're young at the bottom, but guys are developing, growing fast. We have put a lot of confidence in them and they have proven themselves. Everyone is fairly healthy and if we wrestle like we did in the semifinals of the Virginia Duals (a 25-7 win over Ferrum), we'll be tough to beat. We've just got to be consistent."

Williamson added that the team is "more gritty and determined" than last year's squad.

"There's no real holes in our lineup, which definitely gets stronger as we go up in weight," he said. "We have one of the best 235-pounders in the nation (senior Austin Amos) and (junior captain) Dominick Johnson at heavyweight, so that's a great combination to close out each match."

All 16 teams will wrestle three dual matches within their respective pools on Friday, with Liberty challenging No. 10 Grays Harbor (Wash.) College at 11:45 a.m., No. 16 Rensselaer Polytechnic Institute  (RPI) at 3:15 p.m., and No. 8 University of Maryland Baltimore County (UMBC) at 7 p.m.

"We have wrestled UMBC before, they used to be in our Mid-Atlantic Conference, and they have been traditionally tough," Castro said.

The tournament continues Saturday with consolation round action at 9 a.m., and concludes with championship and consolation final matches at 6 p.m.

"We have to win our first three matches on Friday to advance to the championship quarterfinals," Castro said. "The top six or seven seeds are going to be really competitive."

Pool assignments with seedings and conference affiliations in parentheses: