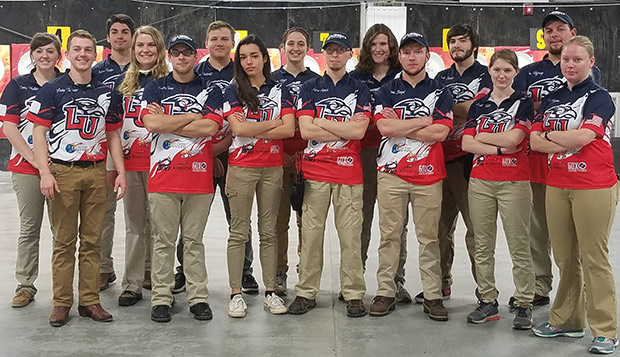 Liberty Head Coach Ian Rigney (back right) took 14 archers to Kentucky, the most to travel to a shoot in program history.

With two of the four (South and North) regional competitions now complete, the Flames and Lady Flames will find out after next weekend's Southwest and West Region events in Mississippi and California, respectively, how many archers they can send to the Feb. 8-12 USCA Indoor National Championships in Las Vegas.

More than 125 competitors in all divisions shot 60 arrows both days and were ranked by total points within the region and nationally.

Head Coach Ian Rigney prepared the team for the regional competition by simulating the same setup in twice-a-week practices in its new range in the Equestrian Center's indoor arena.

"We ran practices with scenarios exactly like what was in Kentucky, so they knew what to expect, which is why we were as successful as we were," Rigney said.

At nationals, the 64 qualifiers will shoot 30 arrows on the first day with that total added to the individuals' regional scores to seed them from 1 through 8 in their respective divisions for the single-elimination championship round shootoffs leading up to the gold level matches.