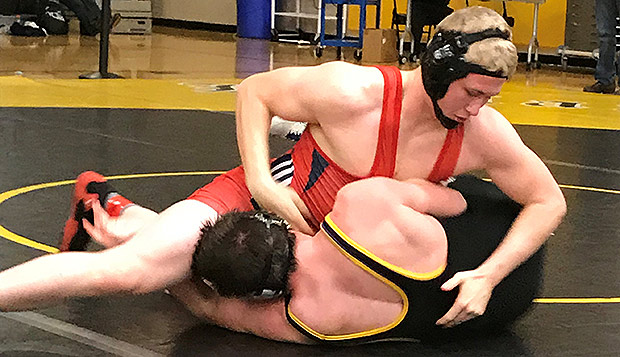 "We entered backups and younger wrestlers and those returning from injury and they were doing really well against other teams' starters," Liberty Assistant Coach Chris Williamson said, noting that all seven of the Flames won at least two matches. "We wanted to get those guys some extra experience and they all showed improvement from the last time they wrestled."

Liberty had the fourth-, fifth-, and sixth-place finishers in the 197-pound weight class, where freshman Alex Hicks, senior David Trigg, and junior Mitchell Rice each won their first-round matches by fall. Hicks received a first-round bye before he pinned Apprentice's Ian Carillo in 2 minutes, 34 seconds and later reached the championship final by pinning Trigg in 5:31. Trigg had pinned Averett's Seth Wilson 1:12 into their first-round match before eventually needing just 13 seconds to finish off Rice in the fifth-place final. Rice had pinned Hampden-Sydney's Austin Carlson in 1:44 before being pinned by Alderson-Broaddus' Alex Eaton in 33 seconds and UConn's Anthony Alvarez in 1:32. Alvarez then pinned Hicks 1:43 into the consolation final.

At 235 pounds, Flames senior David Smith finished fourth, wrestling in his first tournament of the season after tearing his ACL as a junior. He lost his championship semifinal match by 4-2 decision to Penn State-DuBois' second-seeded eventual champion Bryce Hanley after a controversial no-call on his potentially winning takedown in overtime. Smith pinned JMU's Kevin Cunningham in 2:04 in the consolation semifinals before having to withdraw from his third-place final due to an elbow injury.

Flames sophomore Cody Richmond won his fifth-place 184-pound match by fall over JMU's Connor Wrann in 1:54 after being pinned by the Dukes' Ryan Thomas just 1:02 into their consolation semifinal. He had received a first-round bye before dropping a 5-3 decision to UConn's second-seeded eventual champion George Andrews in the championship semifinals.

At 141 pounds, Liberty junior Ben Howard pinned Alderson-Broaddus' Parker Brown 6:03 into his opening match before being pinned in the first period of his second-round bout to slip to the consolation bracket. There, he scored an 8-5 decision over Averett's David Shelton before being eliminated by fall at the 3:00 mark of his consolation quarterfinal.

Flames junior Jacob Brooks got out to a strong start in the 165-pound bracket, winning his first two matches by pin — over UConn's Keith Brown in 3:23 and the Builders' Jeffrey Driscoll in 48 seconds. But he lost his last three bouts by fall — 2:42 into the championships semifinal against Alderson-Broaddus' top-seeded eventual champion Logan Shurina, 3:31 into the consolation semifinals against East Carolina's Peter Becher, and 1:36 into the fifth-place final against UMBC's Anthony Solis.

"It was a really good experience for the guys and they were able to learn a lot," Williamson said. "Everyone had to take three offensive shots every period to focus not so much on winning but more on getting better and developing skills."

Liberty will have its full slate of starters available for this Friday's and Saturday's NCWA National Duals, which it will host for the second year in a row at the LaHaye Ice Center.