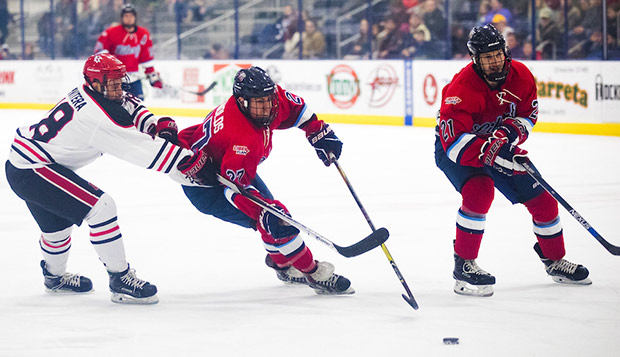 "There were parts of our game where we played well and parts of the game where we didn't play well, but I'm proud of our guys," Liberty Head Coach Kirk Handy said. "We stuck with it and showed a consistent effort. We've got a lot of bodies banged up right now and still scored 12 goals and took over 120 shots in two games, so we're doing a lot of things well."

Sophomore defenseman Chaydan Lauber started the scoring at the 16:51 mark, receiving a pass from junior forward Zechariah Roberts at the top of the left circle and launching a wrist shot through traffic past the glove of Rutgers goalie Christopher Marsillo into the right side of the net.

Exactly one minute later, sophomore forward Brock Thompson finished a fast-break feed from senior forward Grant Garvin in the right circle and rocketing a slap shot past Marsillo for a 2-0 advantage.

With the two teams in four-on-four action after penalties, Flames junior defenseman Basil Reynolds took a cross-ice pass from Garvin and fired a low shot on goal from near the right of the blue line. Junior defenseman Zane Schartz, cutting through the right crease at the perfect time, redirected the puck through Marsillo's five hole to extend Liberty's lead to 3-0 with 13:48 remaining in the first period.

Liberty junior goalie Josh Halpenny (29 saves on the night) fended off a few quality chances by Rutgers on the other end, preserving the shutout until forward Mitch Crenshaw finally ended the Ice Knights' scoring drought against the Flames with a putback of defenseman Cole Asroff's shot from the top of the right circle with 12:38 left in the second period, trimming the deficit to 3-1.

Less than four minutes later, Liberty got that goal back in the final seconds of a power play when Schartz netted his second score on a wrist shot from inside the left circle, set up by perimeter passes from senior forward Tim Bierema and freshman forward Cole Gammer.

Then, with 36 seconds remaining in the period, freshman forward Devin Pierce took a short outlet pass from Gammer deep in his own defensive zone and showcased his exceptional speed. He skated the puck up the left wing and toward the cage before chipping it off the skate of a defenseman over the shoulder of Marsillo.

Rutgers responded to cut the gap back to 5-2 with 10.9 seconds to go when Andrew Yasenchock lifted a shot from along the left boards that Asroff poked inside the right post with the tip of his stick past Halpenny from the right crease.

The Flames stretched their lead to 6-2 just 48 seconds into the third period when Schartz set up Thompson for a driving shot after skating through the slot.

With 16.6 seconds to play, Pierce cashed in on a putback of a shot from the right circle by sophomore defenseman Josh Bergen in the left crease for his fourth goal in four games since transferring in from NCAA Division III Elmira (N.Y.) over Christmas break.

"It's a true blessing to be here and I'm very, very excited for the coming years, but I think we really have the squad to make a big run here toward (ACHA DI) National Championships," Pierce said of the March 8-13 tournament in Columbus, Ohio. "That's the final goal."

The Flames, who outshot the Ice Knights, 67-31, are one win away from clinching the ESCHL regular-season title and autobid to nationals.

"That's one of the goals we've had this year and we've put ourselves in a good spot," Handy said. "We're excited to go to Delaware and to keep progressing and rolling from there. We have some work to do this week to continue to refine and build to where we want to get to." 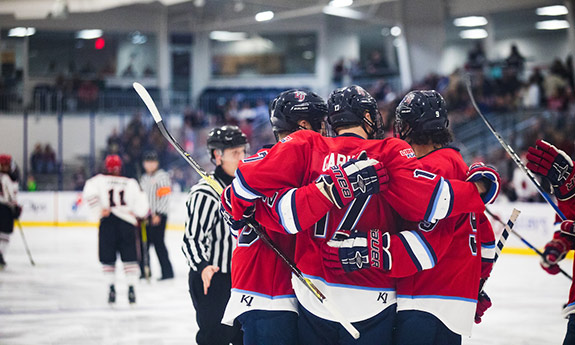