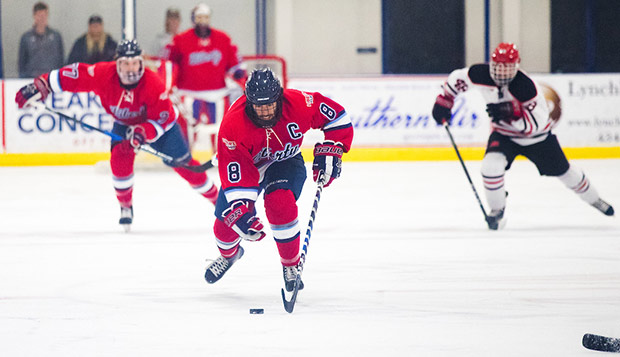 "We came back a week early before our first game and that has paid dividends," said senior forward Tim Bierema, who moved up to the Flames' top line in place of injured sophomore Quinn Ryan and contributed one goal and one assist. "One of our goals is to win the ESCHL regular-season title, which would put us in the autobid to nationals. We need to beat Rutgers (Saturday) and then two games at Delaware next weekend. We control our own destiny so the next three games are huge for us."

"All four centermen are very solid on the draw," Bierema said. "We're comfortable and we believe in all of the guys in the faceoff circle. (Freshman forward Ryan) Cox is a tough guy to go against and (freshman transfer Devin) Pierce is a new addition and a good guy in the faceoff circle as well, so we're happy to have him. It's always nice to win the draw and get that first 10 to 15 seconds of possession, which can make a difference in games."

The Flames maintained offensive pressure throughout the first period, which ended in a scoreless tie after some exceptional saves by Ice Knights goalie Christopher Marsillo.

Senior forward Grant Garvin, Liberty's leading scorer for a third consecutive season, moved into a tie for the ACHA DI scoring lead with 18:08 to play in the second period when he received a feed from sophomore defenseman Chaydan Lauber along the left boards and backed into the left circle before catching Marsillo off guard by slipping a delayed turnaround shot through the five hole for a 1-0 lead.

After killing off a five-minute boarding penalty assessed to freshman forward Sam Carlson — one of only five penalties for the contest — the Flames scored again with 1:01 remaining in the second stanza. Junior defenseman Kyle Crane took a pass from Lauber on an odd-man rush from the defensive pairing and trickled a sharp-angled backhanded shot past Marsillo, again through the five hole, to take a 2-0 advantage into the second intermission.

Liberty broke the game wide open with a three-goal third period, sparked by sophomore forward Brock Thompson, who skated the puck along the right wing and through the right circle before getting Marsillo to commit and dishing a short cross to Bierema for a point-blank finish out front.

"It was an unreal pass," Bierema said. "It would have been pretty embarrassing if I didn't bury that one. I'm just happy I could jump in (for Ryan). Thompson and Garvin are easy guys to play with so it wasn't a difficult transition."

Bierema's goal extended the Flames' edge to 3-0 at the 11:42 mark before Thompson again initiated an attack that led to Liberty's fourth score with 3:45 to go. He controlled the puck near the red line and skated into the left circle before having his shot blocked by Marsillo, who also knocked down Bierema's putback but could do nothing to stop Garvin's top-shelf dig a split second later. That lifted Garvin into the ACHA scoring lead with 50 points on the season.

"Thompson made a good play to get the puck on net and it just took resilience from Garvin and I," Bierema said. "I was happy to get a stick on it and then Garvin was able to finish it off, so it was a good play all around. We tried to focus on chipping pucks deep, keeping it simple, and just putting shots on net."

Pierce capped the scoring with 1:48 to play by picking up the puck at the left side of the blue line and skating past two Rutgers defensemen before threading his shot from deep in the right circle past Marsillo inside the near post.

The Flames were down three injured defensemen to start the contest, but maintained possession in Rutgers' end for most of the night, enabling junior goalie Cole Burack to post his fourth shutout of the season with just 13 saves.

"We showed good effort all the way through," Thompson said. "It's tough when guys are out but everyone stepped up today."

Liberty scored all five goals at even strength in five-on-five action and posted its fourth straight shutout against Rutgers (5-15-1, 3-13-1 ESCHL).

The Flames will host the Ice Knights in Saturday's 7 p.m. rematch at the LaHaye Ice Center. Catch LFSN's live webcast on either the Big South Network or WatchESPN. 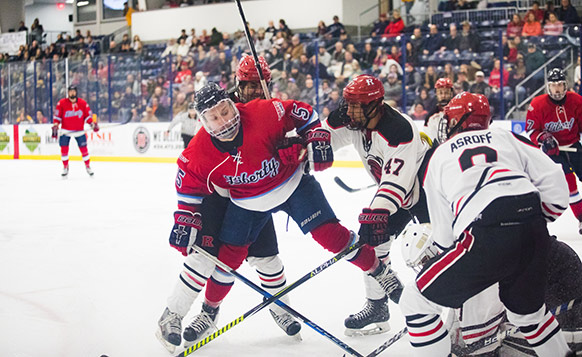