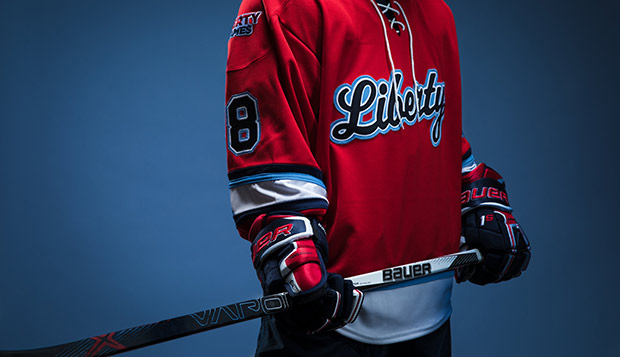 The Flames will wear red for Friday night's 2018 home opener vs. Rutgers at LaHaye Ice Center. (Photo by Kevin Manguiob)

"We're definitely excited to wear the new red jerseys and excited to get the second half of the season going here at home," Flames Head Coach Kirk Handy said. "They're huge games for us and we're 100 percent focused on Friday night. For us, we're going to do everything we can to continue to improve."

Last weekend, Liberty rallied from a 2-0 deficit to defeat the Seawolves, 3-2, in the opener before getting a late goal from freshman transfer Devin Pierce in the third period to pull out a 2-1 triumph in Sunday's rematch to complete their first sweep at The Rinx on Long Island, N.Y., since 2011. The Flames moved up one position to No. 13 in the ACHA DI rankings, still behind Stony Brook, which dropped one spot to No. 12.

The victories came at a cost, however, as Liberty lost sophomore forward Quinn Ryan and defensemen Jacob Fricks and Matt Cruickshank to injury during the series in New York, joining sophomore defenseman Garrett Nelson on the injured reserve list.

"It's part of the game," Handy said. "We believe in each and every one of the guys on the team who proved this past weekend that when guys go down, we can still play well."

Liberty staff and faculty who visit the LaHaye Ice Center between 8 a.m. and 5 p.m. Thursday can pick up free tickets for themselves and immediate family members to Friday night's opener by showing their Flames Pass. The first 300 fans to arrive decked out in red will receive coupons for free food at Zaxby's.

Saturday will be a Police/Fire/EMS/Emergency Services Appreciation Night, with free admission at the door for service members and their families with a valid identification badge.

Liberty scouting report: Junior goalie Cole Burack held the Seawolves to three goals over 120 minutes last weekend and has had the hot hand for the Flames of late, posting an 11-4 record with a 1.86 goals-against average, 95.3 save percentage, and three shutouts.

To strengthen the depleted defensive corps in front of them, Handy will again call on senior forward Colt Steele to drop back and join sophomore Josh Bergen, another converted forward, to form the Flames' third pairing.

"He is very versatile and he has played well for us back there," Handy said of Steele, noting juniors Zane Schartz (15 goals, 28 assists) and Basil Reynolds are the top tandem with junior Kyle Crane and sophomore Chaydan Lauber the second pairing. "We're excited as we continue to focus on the defensive aspect of our game and believe it's going to be a big part of our success, how we play in our defensive zone."

Senior Tim Bierema will replace Ryan (11G, 24A) on the Flames' top forward line that also features senior alternate captain Grant Garvin (16G, 32A, 48 points, third most in ACHA DI), and sophomore Brock Thompson (18G, 19A). Pierce will continue to play on the second line with fellow freshmen forwards Jordan Bochinski (10G, 8A) and Cole Gammer (9G, 17A) while sophomores Victor Blomberg and head captain Josh Hamilton will team with freshman Ryan Cox to form the third line.

All-time series: Liberty leads 9-1 after taking three of four meetings with the Ice Knights last season and sweeping them by 6-0 scores Sept. 29 and 30 on their home ice.

Coaches: Handy is in his 18th season as the Flames' head coach and has compiled an overall record of 393-172-25. Joe Dickson is 7-21-1 as Rutgers' head coach after taking the helm in the latter half of last season.