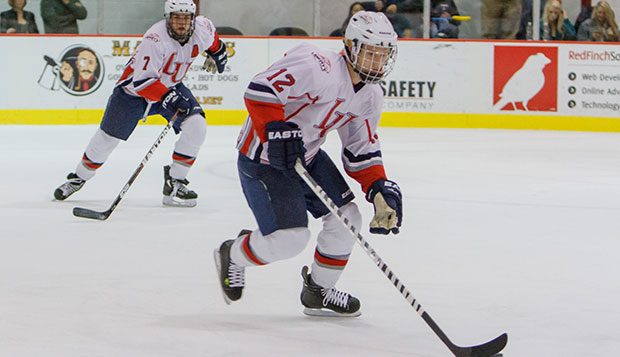 The Flames prepare to host Stony Brook this weekend, coming off a tough three-game road trip, in which the Liberty University Division I men's hockey team posted two victories.

This is Liberty and Stony Brook's second time facing off for a two-game series this season, with the Nov. 17-18 series resulting in a split. The Seawolves successfully defended their home ice by a 6-4 spread in Happauge, N.Y., before Liberty lit up the scoreboard the following night, scoring five unanswered at one stretch in the first two periods, to take the next game 6-3.

Following the win Liberty embarked on its trip where the Flames notched a 5-3 revenge win over Davenport and rolled to a 5-1 victory and eventual split with last year's American Collegiate Hockey Association national championship runner-up Oakland.

Liberty Scouting Report: A 7-3 loss to Oakland last Saturday snapped a three-game Flames winning streak, the longest for Liberty since starting the season 8-0. Despite the loss, the Flames look to be showing signs of life once again after dropping nine of 10 following an unbeaten September.

Rick Turner leads the Flames in points with 44 and is second in the ACHA for goals (27) and top five for points. During the road trip, Turner put up five points in three games, including four goals. Ryley Egan leads Liberty in assists with 19 and is second on the team in points with 28.

In the net Blair Bennett (7-5) had a strong opening game against Oakland, making 36 saves. He has a 3.29 goals against average and a .90 save percentage.

Nick Barbera leads the Seawolves in points with 16 and is tied with Daniel Cassano (14 points) for the most goals on the team at eight. Andrew Balzafiore has 12 assists to lead the team.