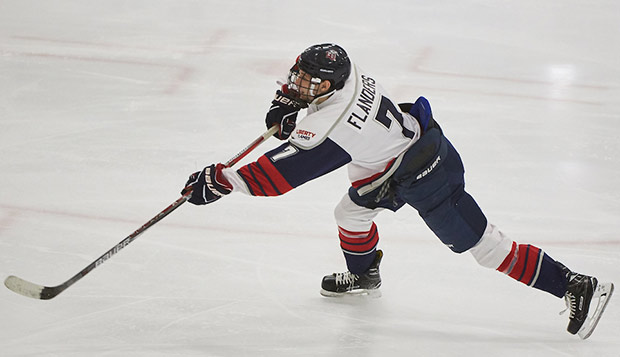 Senior Marshal King started the scoring on Sunday at the 17:26 mark, finishing a feed from spring semester pick-up Eric Masters with a wrist shot into the top right corner.

Nearly 11 minutes later, freshman forward Blake Flanders put back the rebound of senior forward Jeff Wilson's shot from the point set up by senior center Matthew Perri for a 2-0 advantage.

Less than two minutes later, Masters tipped in a shot launched from the top of the circle by sophomore defenseman Jackson Roy for his first goal at the DII level, extending the lead to 3-0.

With 34 seconds to go in the first period, freshman forward Michael Niederer sent an entry pass to Flanders out front, where he was checked immediately after releasing a one-timed shot blocked by Louisville goalie Greg Russell. Senior forward Paul Lamoureux controlled the rebound and maneuvered around Russell before lifting a wrist shot into the open net to make it 4-0.

Sophomore defenseman Ryley Richardson scored for the first time this season four minutes into the second period on a shot from the top of the right circle that Russell let trickle over his glove and across the goal line.

A minute later, Lamoureux pocketed his second goal of the game on a rebound of a shot by Flanders that he set up with a pass from deep in the right circle. Soon afterwards, Masters netted his second score by batting in a loose puck on the rebound of his fast-break wrist shot set up by Niederer, stretching the Flames' edge to 7-0.

After forward Tyler Samuelson got the Cardinals on the scoreboard with a high shot off the glove of Liberty junior goalie Blake Scott moments later, Lamoureux completed his hat trick with an open wrist shot from the right side off a cross-crease feed from sophomore forward Drew Crilly at the 8:49 mark.

Niederer set up senior defenseman Sean Bakker for a backhanded score in the left crease just over a minute later before Crilly received a long outlet from Wilson and scored shorthanded to make it 10-1 in favor of the Flames with 3:35 left in the second period.

Louisville scored on a set play to start the third period and Louie Abounader stole the puck back in the right circle and fired in a backhand less than a minute later to draw the Cardinals within 10-3.

King scored the Flames' first goal of the third period on a rebound of a driving shot by Masters at the 17:04 mark before Louisville answered with Nathan Newport's fifth goal of the weekend.

Senior defenseman Nathan Glick sent a beautiful assist across the goal mouth to Lamoureux for a point-blank finish on his fourth goal with 6:49 to go before he netted his fifth off an assist from Clarke with 2:58 to go and the Flames on a power play. Roy capped the scoring with a putback of his own shot less than a minute later.

Liberty will return to action in the LaHaye Ice Center this Sunday at 11:30 a.m. against Delaware before hosting Maryland on Tuesday at 7 p.m.