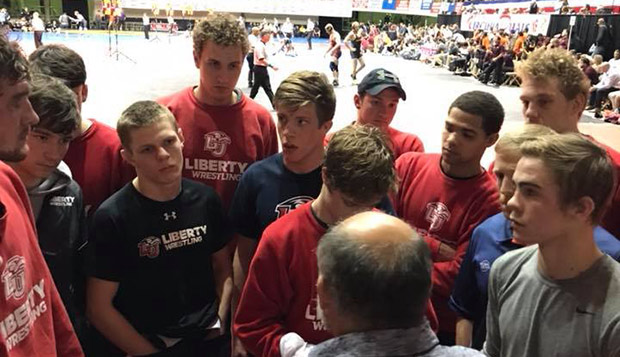 "That was the first time we've ever made it to the finals," Flames Assistant Coach Chris Williamson said.

Liberty overwhelmed Ferrum, 25-7, without scoring a single pin or technical fall. It was a rewarding way to pay back the Panthers, who had doused the Flames by 40-7 and 36-6 scores the past two seasons.

"It was a pretty emotional rollercoaster," Williamson said. "We saw them wrestle, saw their lineup, and knew the matchups. Our game plan was to get through 149 and keep the score close, ended up winning three of those first four matches which broke it open, and we pretty much dominated the entire match, which was unexpected."

After Keegan Smith dropped a 13-9 decision at 125 pounds, Flames 133-pound freshman Blake Justis evened the score at 3-3 by pulling out a 10-8 decision over Bailey Cooper before freshman Reid Stewart defeated Tatom Tyree, 6-1, at 141.

Freshman Chad Cantrell extended Liberty's lead to 9-3 with an 8-5 decision over Clifford Harrison at 149 before Andrew Burgette stretched it to 12-3 with a 3-1 victory over Braxton May-Nicholson at 157.

Following a double forfeit at 235 pounds, Liberty senior Austin Amos capped the triumph with a 3-1 decision over Alveno Matthews at heavyweight.

"No one was a far and away favorite in any of the matches, and they were all really closely contested which made it an exhausting match, but probably the most fun match we've had all year," Williamson said.

In the championship finals, Liberty was overcome by King, which advanced with two lopsided victories over Mid-Atlantic Conference teams — 42-12 over Averett and 34-11 over Apprentice School. Scott, who scored an 18-3 technical fall over Bailey Slattman at 165, and sophomore Sam Karel, who defeated Darius Rutland by 9-7 decision at 174, were Liberty's only two winners against the Tornado.

"We wrestled them last year in the same tournament and every now and then, you wrestle a better team and get beat," Williamson said. "The final score doesn't reflect how close the match really was. There were a lot of technical points to work on that showed in the final match, which is a good thing so we can make those adjustments going into the NCWA National Duals."

Liberty will host the national duals for the second season in a row Jan. 26-27 in the LaHaye Ice Center, after finishing runner-up to Emmanuel last year.