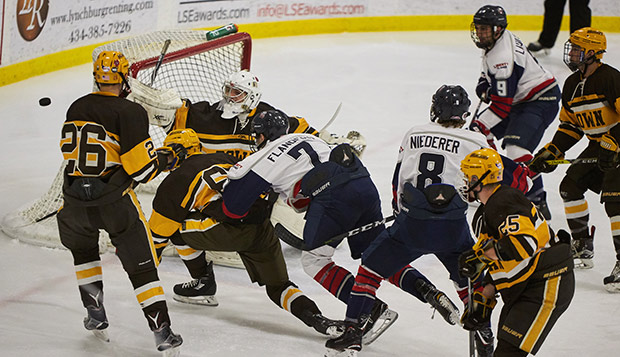 Seconds after a clutch save by freshman goalie Adam Partridge, Lamoureux ignited the Flames' attack at the 15:37 mark of the first period, capitalizing on a two-on-one break with an open-net finish off a cross-crease assist from Michael Niederer.

Lamoureux netted his second goal with 8:34 remaining in the period, on a putback in the slot of a shot from the point by freshman forward Blake Flanders.

Christopher McDermott cut Liberty's lead in half with a shot from inside the left circle that caught Partridge off guard with 14:02 to play in the second period.

That's how the score remained until the 15:22 mark of the third period when Lamoureux completed his hat trick with a laser shot from the high slot past a screen and inside the right post to stretch the Flames' advantage to 3-1.

With the teams skating in four-on-four action, the Profs (8-10) responded with two goals in a 10-second span before and after the 5:00 mark on a fast-break finish by Bobby Penrod deep in the left crease and a shot by Anthony Dellarose right after a faceoff in the left circle.

"We started the game really well and went downhill a little bit before we picked it up the last three shifts," Flames Head Coach Ben Hughes said.

"We haven't played for a month, so it was pretty rough," Lamoureux added. "Hopefully, the next game will be better."

The Flames will also host the Feb. 23-25 Southeast Region tournament. Currently ranked third, Liberty would receive a first-round bye and have to win two games to return to the ACHA DII National Championships in March in Columbus, Ohio.

"I'm pretty confident with the team we have that we'll be able to get back there," Lamoureux said. "Talent is worthless if you don't have any work ethic. When you combine those with chemistry, I think we can be the best team in the league."

Over the Christmas break, the Flames (8-5) added former ACHA DI men's forward Eric Masters, who played on the men's lacrosse team the past two seasons, to strengthen their attack.

"He's been practicing with us for a while now so he's gotten his reps," Hughes said. "He's got a really good shot, so if he can get some time and space and get his shot off, he will be a good asset for us."