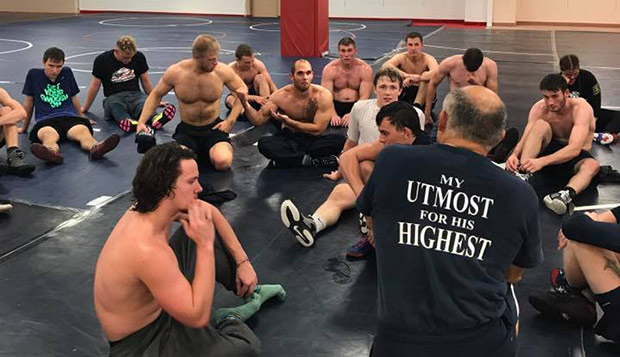 Liberty Head Coach Jesse Castro huddles with his team in the Flames' practice room during a fall workout.

Competing in only its third dual meet of the 2017-18 season, Liberty University's men's wrestling team opened action in the American Collegiate Division of the 38th annual Virginia Duals with a 33-15 triumph over Greensboro, Friday afternoon at the Hampton Coliseum.

The Flames overcame an early 9-0 deficit following losses at the 125 and 133 weight classes to win three of the next four bouts by forfeit, pin, or technical fall. Sophomore 157-pounder Andrew Burgette started the swing of momentum with a 16-1 triumph over Conan Wilson to cut the team deficit to 12-11 before freshman Joseph Scott gave Liberty the lead by decking Quaevon Cannon in 2 minutes, 21 seconds.

After Liberty sophomore Luke Ely dropped a 6-5 decision to Tyron Dudley at 174 and the Flames picked up another forfeit win at 184, junior captain Taylor Westlake scored a 9-0 major decision over Carlos Ortega at 197 pounds before junior captain Dominick Johnson concluded the match by pinning Greensboro heavyweight Mykel Williams in 4:45.

Liberty advances to Saturday's 2 p.m. championship semifinal round match against Ferrum, a team that has drilled the Flames by 40-7 and 36-6 scores the past two seasons. The Panthers were 33-12 winners over Alderson-Broaddus in Friday's first round.

Complete brackets and results are available online and will be updated live through Saturday's brackets, scheduled to conclude with championship round matches at 8:30 p.m.