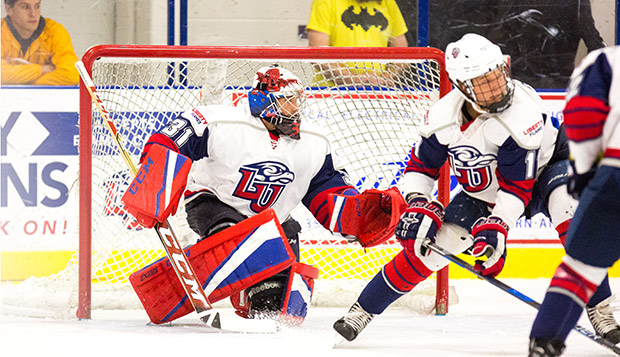 "We control our own destiny and it's all about how we start here," Flames Head Coach Kirk Handy said. "Our guys will be ready to play on Saturday and we're looking forward to it. Guys are working hard in practice, competing and executing and it's been great to see. It's going to pay off. I feel like as a team, we are ready to take it to the next level."

The Flames left for Long Island Friday morning ready to face off against the No. 10 team in the ACHA DI rankings. Last year, in its first season in the ESCHL, Liberty advanced to nationals after dethroning the four-time defending ESCHL tournament champion Seawolves in the title game.

"We've had some really, really good skates, better than expected coming back from the break," said sophomore forward and head captain Josh Hamilton, who returned from a knee injury late in the fall semester. "All the guys seem to be clicking and we're ready to go for the Stony Brook game. Last year, we went up there after New Year and they spanked us both times (by 7-1 and 3-0 scores). If we sweep them this weekend that will be good for our program and the rest of the year."

The Flames lead the South Division but trail the Seawolves in the overall ESCHL standings. Only Saturday's first game will count toward the regular-season standings, as did the first game of their series at the LaHaye Ice Center, won by Liberty, 8-2, when freshman forward Jordan Bochinski and sophomore forward Brock Thompson netted hat tricks.

"We have to go up there and take care of business," said Hamilton, who plays on the same line as freshman Ryan Cox, who is also returning from injury, and sophomore Victor Blomberg. "They're both working machines and I like playing with guys that will give 100 percent each time they're on the ice."

Liberty scouting report: The Flames boast four of the top five scorers in the ESCHL, including senior forward and alternate captain Grant Garvin (16 goals, 29 assists, 45 points), the second-leading scorer in ACHA Division I. Junior Zane Schartz ranks sixth overall and first among defensemen in scoring (14G, 27A), and is tied for first overall with nine power-play goals.

Hamilton has returned to strengthen the attack along with freshman NCAA Division III transfer Devin Pierce, while sophomore defenseman Matt Cruickshank has also recovered from an injury and will shore up the defensive corps.

Stony Brook scouting report: The Seawolves, who went into the Christmas break with a sweep of New York University, feature 11 double-digit scorers, led by forward Brendan Calello (9G,13A), who is tied for the team lead with three game-winning goals. Defenseman Brendan Pepe has distributed a team-high 17 assists to go with his three goals while forward Kevin Murphy (11G, 8A) leads Stony Brook with seven power-play goals.

All-time series: Liberty leads the series with Stony Brook, 22-14-3, even after losing nine of its past 11 regular-season matchups.