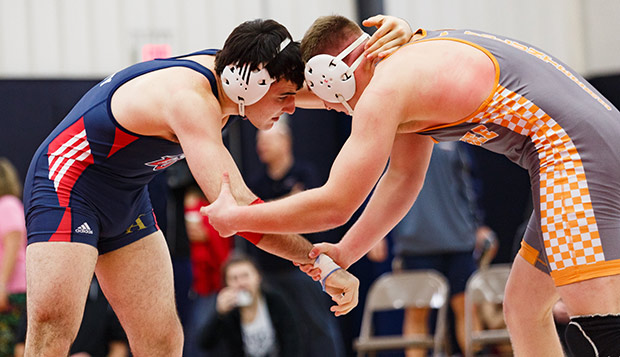 Liberty University's men's wrestling team is seeded fourth in the American Division for Friday's and Saturday's 38th annual Virginia Duals at the Hampton Coliseum. The Flames placed fifth out of eight teams in that bracket at last year's tournament.

Club Sports Video Coordinator Gabe Henderson interviewed Liberty Head Coach Jesse Castro for a midseason update before the team bused out of Lynchburg on Thursday and weighed in on Friday morning.

"The Virginia Duals is a huge competition, a national event with schools from all over the country," Castro said. "We focus on this event big-time. Whenever you have an opportunity to compete on a national level, take advantage of it."

He has realistic expectations for the Flames, who will host the NCWA National Duals in two weeks, Jan. 26-27 at the LaHaye Ice Center.

"This is our third dual meet of the season and I think we're going to be in some pretty tight matches, so we're going to have to be stubborn and come together and go for those bonus points," Castro said.

Tournament information is posted online, with results updated after each match.