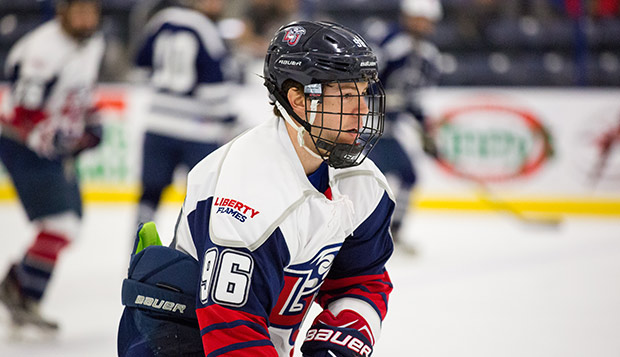 Liberty University ACHA Division II men's Head Coach Ben Hughes spoke with Club Sports Video Coordinator Gabe Henderson for a recent edition of the Coaches Club as he and the Flames prepare to host Rowan on Friday at 3:30 p.m. and Louisville on Sunday at 12:30 p.m. in a DII Showcase at the LaHaye Ice Center.

The Flames (7-4-1) won five of their last six games, capped by a 13-5 triumph over Virginia Tech on Dec. 3 at the Roanoke Civic Center. Liberty is ranked third in the South Region going into the spring semester and will likely need to win both of its games in the Feb. 23-25 Southeast Region Tournament on Liberty's home ice to qualify for a fifth consecutive trip to the 16-team ACHA DII National Championships in Columbus, Ohio, in March.

"(Former Liberty coaches) Chris Lowes and Mike Morrison had a lot of success with the Division II program for the last number of years and they had some high expectations when they left, so I'm trying to pick the ball up where they left off," Hughes said. "The guys in the locker room have done a great job and the new leadership aboard this year has provided a great foundation."

Working primarily with Liberty's defensive corps, he has also kept a close eye on the goalie position with insight from Assistant Coach Blair Bennett.

"Both Blake (Scott) and Jarrett (Epp) have been really good for us in the net and we're looking to get (freshman Adam) Partridge some games this semester, too," Hughes said, "He's been great and getting better every single day."

"Guys like Rob Ward and Paul Lamoureux have been huge catalysts for us up front and the new guys on board, (sophomore forwards Jamie) Crane, (Drew) Crilly, and (Andy) Clarke and (freshman forward Michael) Niederer — everyone from the first through fourth line has been contributing," Hughes said.