Trio of world-class triathletes to join Flames' team this spring 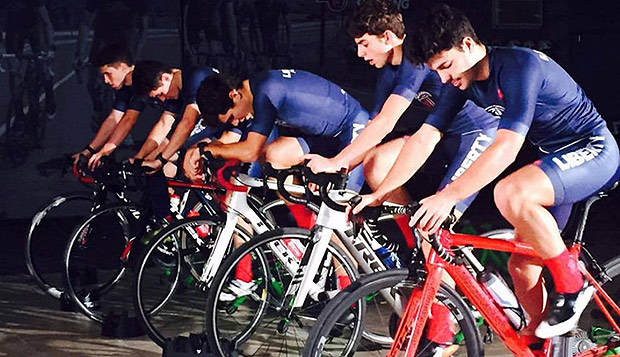 Liberty University's triathlon roster will be strengthened by the addition of a handful of world-class triathletes as the Flames prepare for a potential run at the USA Triathlon Collegiate National Championship, April 27-28 in Tuscaloosa, Ala.

Third-year Head Coach Parker Spencer has recruited Javier Lluch Perez from Spain, Giovanni Bianco from Italy, and Levente Lukacs from Hungary to join the already-deep team, with many more prospects committed for the Fall 2018 semester.

"We want to develop the world's top endurance athletes here at Liberty," Spencer said. "My goal is to win the Collegiate National Championships, but it does not stop there. We have the opportunity to have athletes representing multiple countries in future Olympic Games."

Bianco is Italy's reigning sprint triathlon and sprint duathlon age group national champion. He will compete with Spencer in the North American Half Ironman Pro Championships on May 5 in St. George, Utah, where they will contend for a qualifying spot in the Half Ironman World Championships in South Africa later this year.

Lukacs is a former pentathlete who switched to triathlon last year and reached the podium in all but one race he entered in 2017. His has run personal-best times of 32 minutes, 4 seconds in the 10K and 1:13:12 in the half marathon and plans to compete professionally at the Half Ironman distance.

These three triathletes will challenge sophomore Thomas Sonnery-Cottet, a professional triathlete from France, and freshman Bobby Hammond from New Jersey for the top five spots on the team.

"We now have a team that should not only contend for the national championship but also some of the biggest races in the world all while representing Liberty," Spencer said.

The recent opening of state-of-the-art facilities such as the Liberty Indoor Track Complex and Liberty Natatorium, which rank among of the finest collegiate tracks and swimming pools in the nation, give Liberty a competitive advantage in recruiting. Access to a new cycling studio and exercise science labs are other attractive amenities, as are the 60-mile on-campus Liberty Mountain Trail System, ideal for mountain bike and cross country training, and the Blue Ridge Parkway, a road cyclist's paradise only a 20-minute drive away.

"These athletes are coming here to Liberty because when you combine our facilities, … athletic trainers, and coaching staff, there is no place like this in their country … or, I believe, the entire world," Spencer said. "We have an environment at Liberty that is perfect for Olympians and future Olympians to continually develop their skills to compete in the highest level for the sport."

Charles Fernandez, a sophomore who competed in the Pentathlon for Guatemala at the 2016 Summer Olympics in Brazil, currently trains with the triathlon program with an eye on the 2020 Summer Games in Tokyo. His brother, Danny Fernandez, is a freshman who just competed in a Pentathlon in Guatemala that will also put him in the running to represent his country in Japan. Both brothers also competed on Liberty's first-year men's swimming & diving team coached by Spencer this fall.