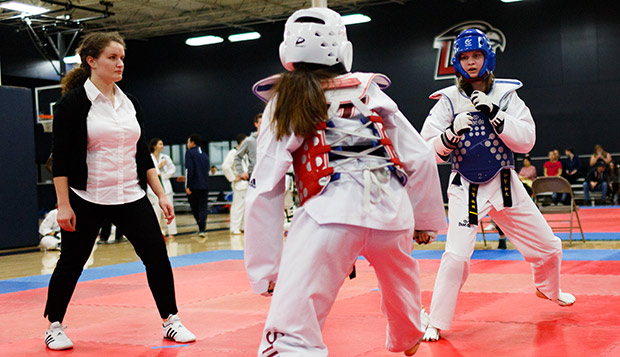 A larger roster and new practice facility at the former Macy's building in River Ridge Mall allowed Liberty University's men's and women's taekwondo teams to compete at a higher level throughout the fall semester, highlighted by a dominating performance at their Alliance of Collegiate Taekwondo Conference (ACTC) meet hosted by the University of North Carolina in Chapel Hill, N.C.

"We had three people earn their black belt this past year and that was absolutely amazing," said Liberty Head Coach Tom Childress, who expects two more next semester. "Any time you teach martial arts, you want to see that progression of people starting with you as a beginner and advancing all the way to their black belt."

The Flames and Lady Flames have raised expectations for the spring semester, culminating with the National Collegiate Taekwondo Association (NCTA) National Championships, to be held on the East Coast this year — from April 6-8 at American University's Bender Arena in Washington, D.C.

"I am definitely looking forward to the spring semester and all of the competitions that we are participating in," sophomore yellow belt Wesley Angerville said. "I do expect that we are going to continue to do well and continue to grow. Now that collegiate nationals are on the East Coast, we'll be able to bring our whole team, so we have more opportunities to really represent Liberty and to bring home some medals again."