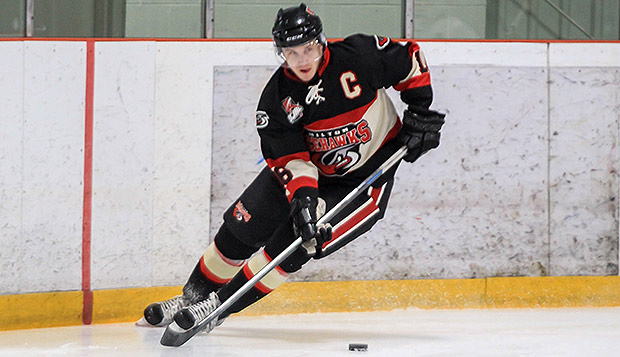 Devin Pierce served as a captain for the Milton (Ontario) Icehawks when Liberty Head Coach Kirk Handy scouted him in a December 2015 game in Toronto. (Submitted photo)

In late December 2015, soon after he had been traded from the Burlington Cougars to the Milton Icehawks in the Ontario Junior Hockey League, Devin Pierce sat down with Liberty University ACHA Division I men's hockey Head Coach Kirk Handy at a Tim Hortons restaurant in Toronto to talk about his hockey career and future plans.

"I felt at peace talking to him and saw God through him and I really felt the call from God ever since," Pierce said of the conversation with Handy, who had scouted him in a game against Burlington.

Pierce, a native of Franklin, Tenn., who fell in love with hockey when his dad took him to see a Nashville Predators NHL game at the age of 5, was named captain of the Icehawks for the final 30 games of that season.

"I had an opportunity to produce and lead the team, which felt good," said Pierce, who contributed seven goals and 18 assists.

Now a 21-year-old center, Pierce is transferring to Liberty from NCAA Division III Elmira (N.Y.) College for the spring semester. He arrived in Lynchburg on Thursday night and stepped onto Liberty's campus for the first time Friday morning.

"I was attracted to Liberty for the school and the education, but the main thing that attracted me was the hockey team and the culture Coach (Handy) has created and the love for God the people have there," he said.

After serving as an assistant captain for the 2016-17 season with the Northeast Generals, a North American Hockey League team based in Boston where he played with current Flames Division II freshman defenseman Kyle Martin, Pierce began his collegiate career at Elmira, but struggled in the secular environment.

"Hockey has always been a big thing in my life, but a lot of people I've played with don't know God and the idea of 25 people together playing for God attracted me like nothing else," Pierce said.

Pierce twice played against Flames' sophomore forward and head captain Josh Hamilton, first for the Nashville Junior Predators in the 2012-13 AA 16-under national championship game won by Hamilton's Greensville Stars squad. Then in the 2014-15 season, Pierce scored 24 goals and distributed 25 assists for the Texas Junior Brahmas who played in the same NA3HL league as Hamilton's Alabama Point Mallard Ducks.

The biomedical sciences (pre-med) major will be eligible when Liberty travels to Stony Brook next Saturday and Sunday to take on their top rival for the regular-season title and automatic bid to the ACHA Division I National Championships set for March 8-13 in Columbus, Ohio.

"Devin's someone who will definitely bring leadership ability," Handy said of Pierce, who is one of five freshman on a 25-man roster that also features 10 sophomores. "He's only in his first year so he'll be able to be a part of a group of guys who can grow together as a unit. He's going to come in and work hard and have a great attitude and bring a consistent effort for us."