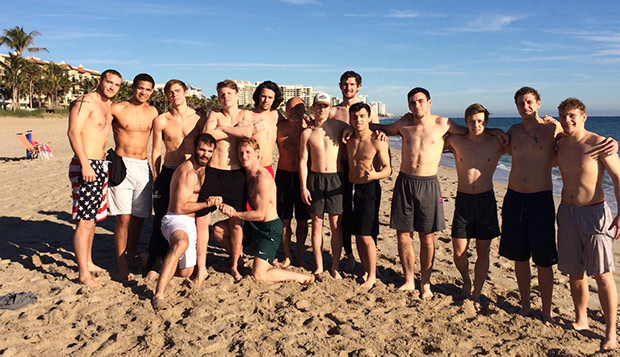 The Flames had some time to unwind and train on the beaches of Fort Lauderdale after competing in the Citrus Classic.

Before ringing in the new year, Liberty University's men's wrestling team rode fifth-place individual finishes from two sophomores — heavyweight Austin Amos and 165-pounder Joe Scott — to place eighth out of 11 teams at the Citrus Classic on Friday and Saturday in Fort Lauderdale, Fla.

"It was a good tournament," Flames Head Coach Jesse Castro said. "No doubt about it, it's one of the toughest ones we go to, with a deep field. We started off pretty good, but had a rough second day."

Liberty was wrestling without three of its starters, including junior captains Dominick Johnson at heavyweight, who was spending Christmas in his home state of Washington, and 197-pounder Taylor Westlake, who is recovering from a lower-back injury.

Scott won his first match by 13-2 major decision over Williams' Nick Anselmi before shutting out NYU's James Murdoch, 6-0, to advance to the championship semifinals. He slipped to the consolation bracket with a 13-9 setback to Augsburg's Brady McFarland before scoring a 19-6 major decision over Upper Iowa's Cody Nelson in the fifth-place final. Also in the 165-pound bracket, Flames sophomore Andrew Burgette placed eighth, dropping an 8-2 decision to Murdoch in the seventh-place bout.

Castro hopes Burgette can trim down to 157 pounds, where the Flames did not enter a wrestler this tournament, in time for their next competition.

"That will really help us out as far as balance in the middle," he said. "Right now, we have three good guys at 165."

Cantrell won his first three matches to reach the semifinals, pinning Ursinus's Leroy Brown in 4:16 before scoring a 12-4 major decision over Williams' Brendon Seyfried and a 14-13 decision over Augsburg's Cruze Hurlburt in the quarterfinals. He lost a 9-0 major decision to Augsburg's Alex Wilson in the championship semifinals before dropping a 9-5 decision to NYU's Matthew Coppola in the consolation semis an 8-5 decision to NYU's Evan Drill in the fifth-place final.

Justis, who opened the tournament with a pin of UNC-Pembroke's Jayquon McEntyre in 6:41, capped it off with a 16-0 technical fall triumph over Williams' Dietrich Hartman in the seventh-place final.

The Flames will be back in action at the Virginia Duals in Hampton, Va., on Jan. 12-13, their last dual meet competition to prepare for hosting the Jan. 26-27 NCWA National Duals for the second season in a row in the LaHaye Ice Center. Before that meet, Castro will send a few of his wrestlers to the Builder Invitational hosted by the Apprentice School at Kellam High School in Virginia Beach on Jan. 21.