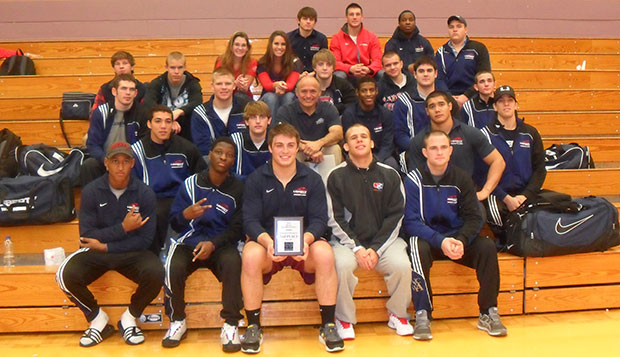 Mark Busse, a 165-pound senior, won all four of his matches for the Flames, including two overtime wins in key matchups. One of the overtime wins was over nationally ranked opponent Everett Colbert of MTSU, who was ranked No. 4 in the National Collegiate Wrestling Association.

The Flames outscored Tennessee Temple 58-12, Southern Virginia University 24-18, and MTSU 23-19. Cumberland edged out the Flames 19-18 to take the tournament crown. Liberty is now 5-2 on the season.

On Nov. 17 the Flames participated in the Jon Parisi Open in St. Charles, Mo., facing tough competitors in an NCAA Division I tournament which featured three of the nation's top 10 programs: the University of Iowa, Oklahoma State University, and the University of Missouri.

Thompson recorded a win over an Oklahoma State wrestler making him one of only a few wrestlers in program history to post a win against the Cowboys. He finised with a 3-2 record.

Earlier in November Liberty had two finalists and a top six finisher in the Fall Brawl at Ursinus College in Collegeville, Pa.

The Fall Brawl is an NCAA Division I, II, and III tournament and gives wrestlers plenty of competition with an average of 32 competitors in each bracket.

Freshman Marcus Miller, a 157-pounder, and 174-pound senior Jonathan Perkins each finished in second place in their bracket and had 3-1 records in the tournament for the Flames.

Busse placed in the top six and had a 4-2 record.

Liberty will take to the mats once again in Buena Vista, Va., Saturday, for the Southern Virginia Open beginning at 9 a.m.