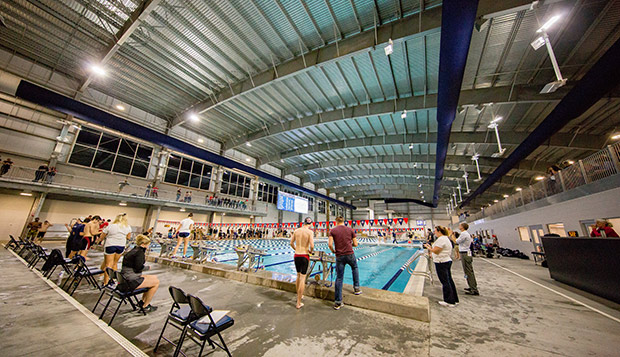 Liberty's men's swim team competed in the second meet held in the new natatorium this past weekend. (Photo by Leah Seavers)

While they won't have a chance to start training in the new facility until January, members of Liberty University's first-year men's swimming team tested the waters in the spectacular Liberty Natatorium, connected to the Liberty Indoor Track Center on East Campus, at Saturday's Virginia Commonwealth Games Master's short-course competition.

"Our guys were extremely excited to get into this facility and swim this weekend," Flames Head Coach Parker Spencer said. "We just wanted this meet to be something that was fun and we didn't really taper them and a lot of our guys swam the best they have all year."

In an interview with Club Sports Video Coordinator Gabe Henderson, Spencer talked about the development and expectations of the first-year program.

"We've started out things very, very well," he said. "Typically, when you're starting a brand new program or you're taking over an existing program, as a coach, you expect three years for that program to actually get to what you want it to look like. But I feel that we're light years ahead of that right now. We have a great crew of guys that we were able to recruit for the first team. I told everyone from the very first meeting, ‘I want you to come in with the mindset of winning a national championship.' The possibility is definitely there. We've got some new guys coming in January so we're very excited for what's to come and to continue to build off the success that we've had."