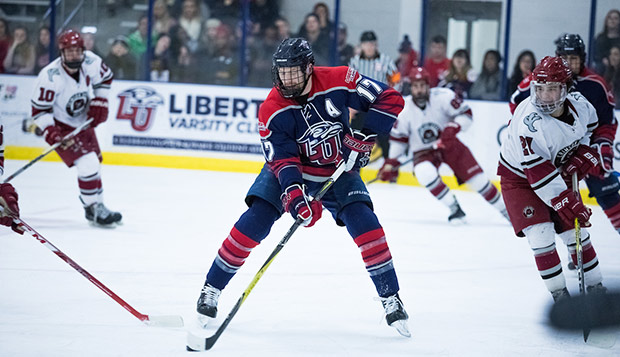 The Flames (16-6) got balanced production from multiple lines and a solid defensive effort in a 7-2 triumph, improving to 6-0 against the Crimson Hawks (7-12-1) over the past two seasons.

"It was a good way to end the semester and I'm proud of this team," Liberty Head Coach Kirk Handy said. "It was a tough weekend, we're going into exams and the guys have got a lot going on, but they were able to bear down and play two solid games back-to-back. The end of the year was real tough with a lot of injuries, and the Christmas break will give us a chance to heal up and get our lineup back together."

Down three defensemen — sophomores Matt Cruickshank, Josh Bergen, and Garrett Nelson — Liberty dropped forwards Colt Steele and Sam Carlson back to shore up the defensive corps and got goals from three other D-men.

"It's nice having such a versatile team to have two forwards who can step back and play defense whenever they're needed," said sophomore defenseman Jacob Fricks, who capped the scoring from deep in the slot with 2:30 remaining off a primary assist from sophomore forward Quinn Ryan. "It shows a lot of depth to our team."

Junior Zane Schartz, the Flames' defensive captain, started the scoring with a blast from the high slot that got past IUP goalie Chase Stanford midway through the first period. He added three assists to move into a three-way tie for fourth place among ACHA DI scoring leaders with 40 points (14 goals, 26 assists). On Liberty's roster, Schartz trails only senior forward Grant Garvin, the Flames' leader for the third season in a row and the league's top scorer with 44 points (16 goals, 28 assists).

Garvin fought his way through traffic in the left circle before slipping the puck past Stanford inside the left post for a 2-0 advantage with 5:02 left in the first period.

"That was crazy," Fricks said. "That was a nice couple moves. Grant's been playing awesome so it was good to see him finally bury one of those."

The Crimson Hawks cut the deficit to 2-1 before sophomore forward Brock Thompson set up Ryan with a pass from the high slot for a one-timed finish from the left circle into the upper netting, making it a 3-1 game with 8:14 left in the second period. Less than two minutes later, Cole Gammer finished the first of two assists from fellow freshman forward Ryan Cox and Schartz's secondary assist, tucking the rebound under the pads of Tyler Kurtz, who had replaced an injured Stanford.

Then, with less than two minutes remaining in the second, sophomore defenseman Basil Reynolds took a pass from Garvin and launched a shot from near the right side of the blue line, extending the Flames' lead to 5-1.

"Basil's been playing awesome," Fricks said. "He's got a nice shot from the point. The big thing is we just need to keep shooting and putting pucks on net. (Defenseman) Kyle (Crane) put in two last night. Any time we can get forwards in front and shots through from the point, good things happen."

IUP forward Brendan George opened the third-period scoring less than a minute after the first faceoff by finishing a breakaway opportunity past Flames junior goalie Josh Halpenny. After Gammer clanged a shot off the crossbar, junior forward Zechariah Roberts received Cox's pass from behind the cage in the right circle and lifted a quick wrist shot into the upper netting before Fricks capped the scoring.

"Every night we have four full lines who can contribute," Fricks said, noting that the top line of Garvin, Ryan (11G, 22A), and Thompson (17G, 18A) have fueled the Flames' attack. "Those guys are tearing it up this year. They're consistent every night. It's a competition between those three. They're just pushing each other to go further and further."

Liberty takes a five-game winning streak into the Christmas break before opening the New Year with a series at Stony Brook on Long Island, N.Y.

"I'm proud of our guys, how they've battled all year," Handy said. "Overall, we like our competitive level and where our team is heading. It was nice to continue to move forward. We're growing, we're getting better. It's going to be an exciting run the second half of the year."

Liberty D-men get tangled up with an IUP player in Saturday's opener. (Photo by Nathan Spencer)