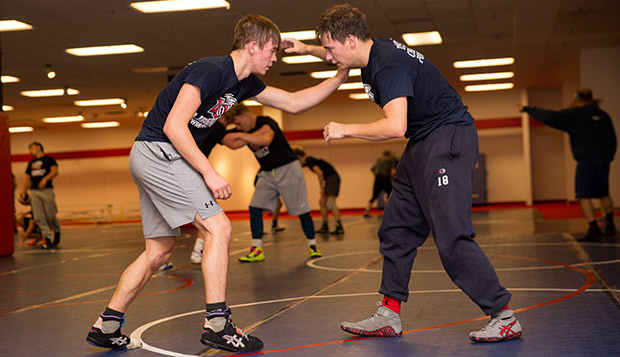 "The was the beginning of our dual-meet season so it was a good way to start," Flames Head Coach Jesse Castro said of the dominating performances over the Golden Bears and Knights. "We knew going in they weren't going to be our toughest competition, but (West Virginia Tech is) an NAIA school and offers scholarships, so we knew they would be competitive, and wrestling an NCAA Division III school (Southern Virginia) is always good."

Liberty won its last five weight classes in each match, from junior heavyweight Dominick Johnson and senior 197-pounder Taylor Westlake all the way down to 165-pound sophomore Joe Scott, a transfer from NCAA Division III Washington & Lee who pinned WVT's Caleb Barley in 1 minute, 55 seconds, and SVU's Matthew Rohrdanz in 3:25.

"They're solid and wrestled well for us," Castro said of Johnson and Westlake, two of his three team captains. "(Scott) was pretty impressive, too. He's added good experience coming in."

At 174 pounds, the Flames platooned sophomores Sam Karel, who pinned Corey Palmer in 2:50, and Luke Ely, who decisioned Keaton Gomez, 8-6.

Similarly, at 184, Castro rotated senior Josh McIlhenny, who pinned the Golden Bears' Micah Ortiz in 1:47, and sophomore Cody Richmond, who decked the Knights' Gordon Whitaker in 4:46.

"Both of them stepped up to the plate and did a good job," Castro said.

"He really wrestled well, showed some good improvement and indication that he's implementing some of the things that we've been working on," Castro said. "He was wrestling well on his feet and developing his game on top as well and turned both of his opponents for back points. He's developing and making good gains."

The Flames have three weeks to prepare for their annual trip to Fort Lauderdale, Fla., where they will compete in the Dec. 29-30 Citrus Classic, an open invitational, before returning to a dual meet format at the Jan. 12-13 Virginia Duals in Hampton, Va.