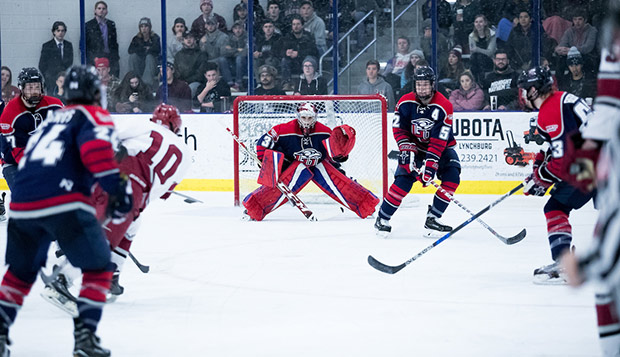 With the season's first snowfall adding to the festive atmosphere around Liberty University's campus, already decked out in Christmas lights down University Boulevard, electricity was in the air inside the LaHaye Ice Center in Saturday's early morning hours.

Flames fans united to near-capacity to support the ACHA Division I men's hockey team's second "Midnight Mayhem" matchup of the fall semester, a 9-2 triumph over Indiana University of Pennsylvania. Liberty raised its record to 4-1 in midnight contests.

"It was a great crowd, and a good atmosphere tonight," Head Coach Kirk Handy said after the No. 14-ranked Flames improved to 15-6 overall. "It was lively."

Junior forward Zak Hayes ignited Liberty's attack just two and a half minutes after the opening faceoff. He skated with speed from the red line before slicing wide through the left circle around Crimson Hawks defenseman Jonathan Spencer and cutting back into the left crease, lifting a sharp-angled wrist shot past starting goalie Tyler Kurtz into the top right corner of the cage.

With 9:40 remaining in the first period, Cole Gammer padded the lead to 2-0 when fellow freshman forward Jordan Bochinski and sophomore forward Victor Blomberg sprung the puck loose along the left boards before Gammer skated in and fired it inside the right post.

IUP (7-11-1) got one goal back on a power-play putback by Tyler Speis in the left crease, following an initial shot by fellow forward Michael Longhitano with 4:46 left in the period.

"In the first period, we came out and had a very good first 10 minutes before we took the foot off the gas pedal a little bit in the tail end of it," Handy said. "We didn't do anything too spectacular in the second period. (Junior goalie) Cole Burack made some timely saves for us when we needed him to."

Five and a half minutes into the second stanza, after Burack blocked one high shot and poke checked another puck from out in front, sophomore forward Brock Thompson took a short drop pass from senior forward Grant Garvin and netted a one-timed finish into the top left corner for a 3-1 Flames advantage.

"Brock's probably been our most improved player from last year to this year," Handy said. "He's a shooter and he's a goal scorer. He's got confidence right now and we need Brock to continue shooting the puck."

Liberty couldn't cash in on back-to-back power-play opportunities late in the second period but its defense killed a penalty that spanned into the third after Gammer slammed Crimson Hawks center Christopher McCambridge into the boards.

The Flames produced back-to-back goals in the third when sophomore forward Quinn Ryan received a pass from Thompson as he skated through the high slot and split the IUP defenders before slipping the puck through the five hole, stretching the lead to 4-1 at the 18:38 mark. Junior defenseman Zane Schartz had started the break with an outlet pass from the defensive zone for the first of his three assists.

Two minutes later, junior defenseman Kyle Crane floated a wrist shot from the left side of the blue line through a screen by Blomberg in front of Kurtz as the puck flipped inside the right post.

Crane's missile of a slap shot from near the same spot off a faceoff feed from Bochinski extended the Flames' advantage to 6-1 with 12:25 to go before Liberty extinguished IUP's five-on-three power play with 9:05 remaining and iced the victory by capitalizing on its first man-up opportunity.

The Flames cycled the puck before Zane Schartz sent an entry pass to Ryan who delivered a cross-ice assist to Thompson for a bar-down blast from in the right circle to stretch the lead to 7-1.

"The third period was our best," Handy said. "We killed off that five-on-three and we were able to get two power-play goals, which was big for us. Guys were battling tonight. We've got guys up and down the lineup who are working hard and that third period was exactly what we needed. We'd like to take that and continue on with that momentum tomorrow."

Two minutes later, with the teams in four-on-four action, Liberty executed a fast break to perfection with Schartz passing to Ryan who set up Garvin for a top-shelf wrist shot from deep in the right circle, extending the lead to 8-1.

Less than a minute after that, with the Flames on a four-on-three, Schartz capped Liberty's scoring by rocketing a slapshot from the high slot inside the right post before IUP top scorer Vinny Casale got one back shorthanded in a pack of Flames with a driving shot from deep in the left circle into the top right corner.

Liberty outshot IUP by a 33-26 margin with Burack making 24 saves for the Flames, who face Crimson Hawks in the series finale and last game of the Fall 2017 semester Saturday at 7 p.m. back in the LaHaye Ice Center. 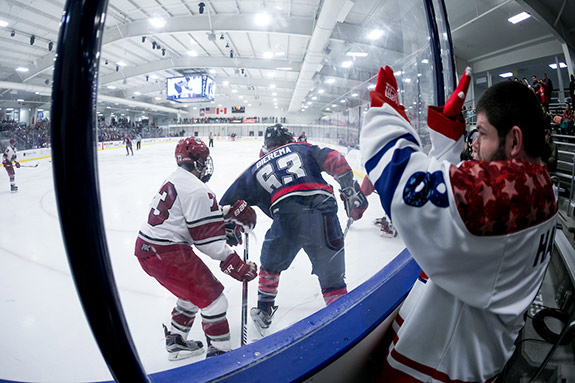 A Flames fan pounds on the glass behind senior forward Tim Bierema. (Photo by Nathan Spencer)