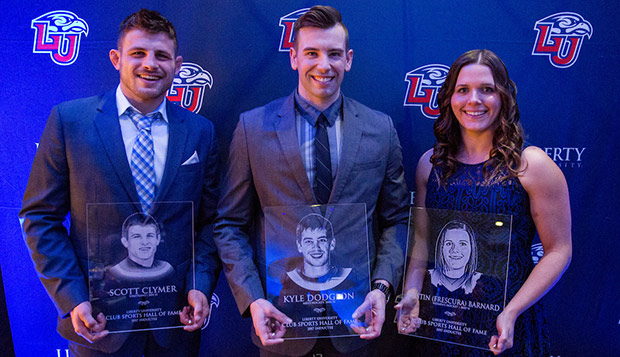 The second-leading scorers in Liberty University ACHA Division I women's and men's hockey history were joined by the Flames' first NCWA wrestling national champion in the fourth class of inductees into the Club Sports Hall of Fame on Friday night at the Montview Student Union Alumni Ballroom.

Kristin (Frescura) Barnard ('11) and Kyle Dodgson ('10) both made the trip down from Ontario for the ceremony. Scott Clymer ('12) traveled from Quakertown, Pa.

Frescura, who was presented by her father, Dante, ranks second behind Carrie Jickling ('16) on the Lady Flames' all-time scoring list with 142 goals (including 24 game winners) and 84 assists for 226 points. She netted a single-season record 96 points (53 goals, 43 assists) as a freshman, helping to lead Liberty to a fourth-place finish at its first ACHA DI National Championship tournament in 2008.

"That was a huge accomplishment for us," Frescura said, crediting coaches Paul and Scott Bloomfield for keeping a shorthanded squad in condition through skating drills in practice that season. "We had 12 players and our goaltender Patti (Smith, a Class of 2016 inductee) was battling through food poisoning at the time. We certainly did not have the ability to roll three or four lines during the game, but … we were in shape. Teams could not outskate us or outwork us."

Dodgson, who made the journey from Canada with his wife, Lindsey, who works as an officer alongside him in the Ottawa Police Service, was presented by his former assistant coach Jeff Lowes, now an associate professor in Liberty's Department of Health Professions.

Dodgson netted 100 goals and distributed 149 assists to rank second on Liberty's all-time scoring list with 249 points, behind only teammate and 2015 Hall of Fame inductee Dave Semenyna (102G, 160A, 262 points). Both were finalists for ACHA Division I player of the year honors in their senior seasons in 2009-10, when Dodgson set a program record and led all ACHA DI players with 77 points.

"He was also a first-team All-American two of his four years, an All-Rookie team member, so he did it all," Lowes said, noting Dodgson helped the Flames compile a 109-38 record over his career and top-10 ranking every year, including a DI franchise-first Final Four appearance as a sophomore. "When he came in, we were transitioning from Division II to Division I and set the bar really high, brought the program up, and left it in a much better state than when he got there. He was a very dynamic player."

Clymer was honored by Flames wrestling Head Coach Jesse Castro, whom he assisted for the 2012-13 season. Clymer brought two of his four brothers, all wrestlers, down for the ceremony, including Bobby, who also wrestled for the Flames the year he served as an assistant coach.

"It was awesome to see how God has used him (Scott), how God has changed his life during his tenure here at Liberty University," Castro said. "Scotty comes from a pedigree of great wrestlers. All of his brothers wrestle so survival is paramount. He set a precedent as the first wrestler to be an NCWA national champion."

Clymer's tenacity on the mat was matched only by his loyalty to the program, as he was one of only a handful of wrestlers who stayed with the program when it was reclassified from NCAA Division I to the NCWA level before his senior season.

Castro said Clymer helped the team make the transition to the NCWA ranks and lay the foundation for the Flames to capture their first NCWA National Championship as a team in 2015. He also commended the Club Sports program for allowing him to maintain a top-level program at the NCWA level.

"I have had the opportunity to coach on an NCAA Division III, NCAA Division II, NCAA Division I, and wrestle on an NAIA and NCCAA level and this (Club Sports) organization is second to none," Castro said. "I've seen every division out there and this is as good as any of them with the work (Athletic Director) Kirk Handy and his staff does."

All three inductees will be honored during the first intermission of Saturday's 7 p.m. ACHA Division I men's hockey game against IUP at the LaHaye Ice Center. 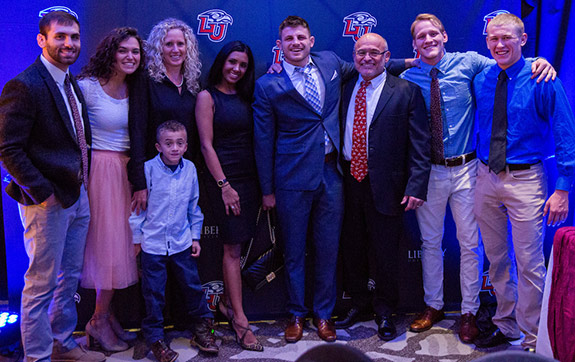