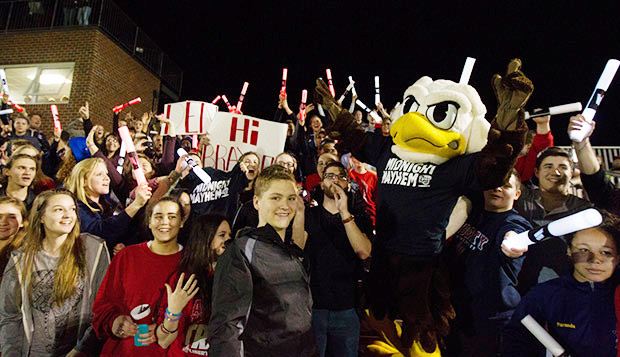 Sparky has attended many recent 'Midnight Mayhem' matchups, including one at the Liberty Lacrosse Field the past few Spring semesters. (Photo by Jessie Rogers)

Since Liberty University's men's lacrosse Head Coach Kyle McQuillan introduced the concept of "Midnight Mayhem" in the Spring of 2012, it has taken off as a favorite late-night-approved activity among residential student fans.

The Flames' Club Sports department now puts on a total of four "Midnight Mayhem" events in three different sports each school year, including tonight's ACHA Division I men's hockey game against Indiana University of Pennsylvania at 11:59 p.m. at the LaHaye Ice Center.

"We're creating an event that's wildly competitive and … continuing to find new and creative ways to market the event, different types of giveaways to promote it," McQuillan said. "Our department is fantastic in giving us the resources to be able to make the most of it."

Liberty's men's volleyball team introduced its own Midnight Mayhem contest in January of 2015, drawing more than 4,000 fans to the Vines Center in each of the past three showdowns, the past two against Virginia Tech.

"It ends up being a very exciting event that draws big crowds and the atmosphere's just electric," Flames men's volleyball Head Coach Bryan Rigg added. "They do an amazing job with the lights, with the music, the sound."

In November of 2015, the Flames' hockey team defeated Delaware before an overflow crowd of 4,000 in its Midnight Mayhem debut.

"We kind of took the idea from lacrosse and ran with it," said Kirk Handy, Liberty Club Sports athletic director and ACHA DI men's hockey head coach. "We decided to branch out to volleyball and to men's hockey, and it's been a huge success. It is without a doubt one of the best events on campus. The students are wound up because it's at midnight and they're rearing to go." 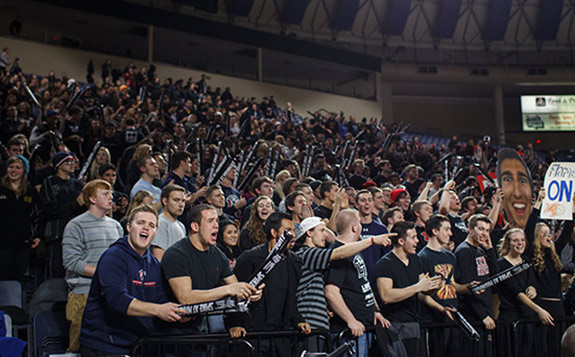