Flames to close out Fall slate with home series against IUP 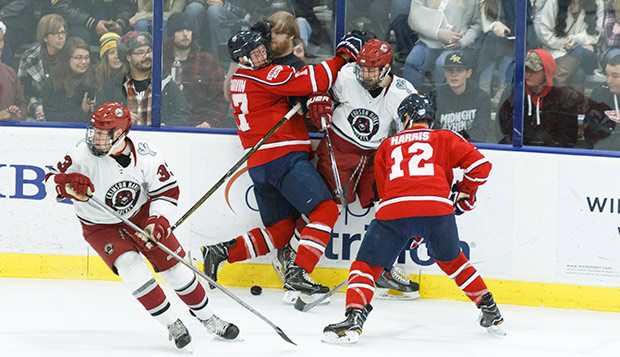 The Flames will battle IUP in the 'Midnight Mayhem' for the second year in a row after defeating the Crimson Hawks last Dec. 9 by a 5-2 score. (Photo by Nathan Spencer)

Liberty is 3-1 in midnight matchups over the past three seasons, most recently with a win over West Chester on Sept. 23.

Fans are encouraged to reserve tickets online, at a promotional price of $2, to avoid being turned away at the door, as the midnight game in September sold out well before faceoff.

Liberty's Club Sports department is partnering with Campus Life to offer a pre-game tailgate experience from 9-11 p.m., using the commuter trailer set up for away Flames Football games. It will be equipped with outdoor TVs showing live NHL action and heat lamps to combat the cold (temperatures are forecasted to dip into the low 20s). Free pizza, snacks, and hot chocolate will be served to students swiping their Flames pass while cornhole and other tailgate games will be offered in the parking lot.

During Saturday's first intermission, Liberty will recognize the Club Sports Hall of Fame Class of 2017, which includes forwards Kyle Dodgson ('10) and Kristin Frescura ('11), the Flames' and Lady Flames' second-leading scorers in ACHA Division I men's and women's hockey history, respectively.

Scouting preview, Games 21-22: Indiana University of Pennsylvania (7-10-1) vs. No. 14 Liberty (14-6, 13-2 ESCHL), Friday (11:59 p.m.) and Saturday (7 p.m.) at the LaHaye Ice Center. Both games will be webcast live by the Liberty Flames Sports Network (LFSN) with coverage carried on the Big South Network and also streamed through WatchESPN.

Liberty scouting report: The Flames enter this weekend's series with a near-identical record as last year, when they concluded Fall semester play with a sweep of the Crimson Hawks to take a 16-7 mark into the Christmas break.

Liberty's offense came to life in last weekend's sweep at West Chester, after scraping by with a 3-1 win in the opener that caused it to slip one spot to No. 14 in this week's ACHA Division I rankings. The Flames overcame a 2-0 deficit in the rematch by scoring the last 10 goals in a 10-2 triumph.

Previously, after losing its first game against new ESCHL foe New York in the series opener, Liberty needed a goal by junior Zechariah Roberts to end a scoreless tie in sudden-death overtime, which is how the Flames capped their sweep of IUP last December, only on a game-winning golden goal by defenseman Zane Schartz.

Liberty's attack is spearheaded by senior center Grant Garvin (14 goals, 25 assists), who ranks first in the ESCHL and fourth in ACHA Division I in scoring, just three points out of first place. He is complemented by Schartz (12G, 21A), sophomore linemates Brock Thompson (15G, including three game-winners, 17A) and Quinn Ryan (9G, two game-winners, 19A), and freshmen forwards Cole Gammer (7G, 15A) and Jordan Bochinski (10G, 7A).

Series: The Flames have won all four meetings in the series over the past two seasons.