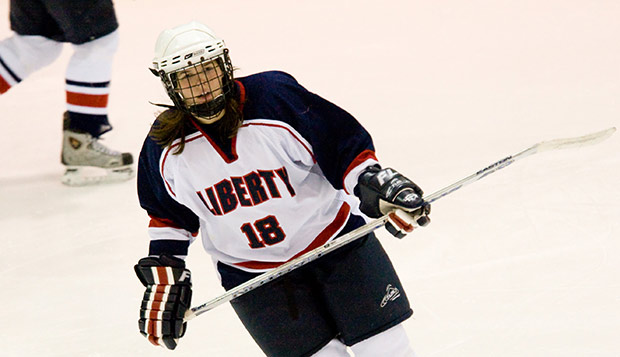 Former Liberty forward Kristin Frescura skates in a game against Rhode Island during her freshman season on Jan. 18, 2008.

"It became a nightly routine for us to spend almost an hour in the driveway … shooting hundreds of pucks at our hockey net and trying to hit as many targets as possible," she said. "It was a learning experience for me, having my dad by my side giving me pointers on my wrist shot and slap shot."

Through those lessons, he not only trained her to become a prolific scorer on the ice, but instilled a work ethic that enabled her to thrive as a student in Liberty's kinesiology and exercise science programs and now in her professional career.

"My father allowed me to excel in the sport of hockey and made sure I had everything I needed to be successful," Frescura said. "He has always been a role model to me, an example of determination, persistence, and a strong work ethic. He taught me to always give my best effort, to never give up, and always value my accomplishments, no matter how big or small."

Not surprisingly, she chose him to be her presenter when she is inducted into the fourth class of Liberty's Club Sports Hall of Fame on Friday in the Montview Student Union Alumni Ballroom.

After playing for the Sudbury AA Lady Wolves in high school and training with the boys at summer AAA boys hockey schools, Frescura received many scholarship offers from colleges in Canada and the United States. She fell in love with Liberty on a College For A Weekend (CFAW) visit and went on to become the Lady Flames' top scorer with 142 goals (including 24 game-winners) and 84 assists (for 226 points in 124 games) over a four-year career from 2007-11. (She currently ranks second in scoring behind Carrie Jickling, who eclipsed her points total as a graduate forward last season).

Frescura netted a single-season record 96 points (53 goals, 43 assists) as a freshman, to help lead Liberty to a fourth-place finish at its first ACHA DI National Championship tournament in 2008, complemented by linemate Andrea Joyce, who also scored more than 90 points and shared team MVP honors with her that season.

"In each new city that we visited, Coach (Bloomfield) would organize a tour for us so that we could see more than the arena," she said. "Those team activities brought us together off the ice and strengthened our friendships."

Her father and younger sister, Danielle, would travel to see her play when they visited Michigan or New York, offering constructive post-game criticism and emotional support.

For this weekend's ceremony, Frescura will be accompanied by her husband, Robert Barnard, who she married on Sept. 29.

They met through hockey — Barnard is a defenseman in the Wentworth Men's League in Hamilton while Frescura is in her fourth season playing for the Brantford Ice Cats Senior A team in the Lower Lakes Hockey League.

"We are at the rink probably three or four times a week and we are each other's biggest fan," she said. "He gives me positive feedback after each game and provides so much encouragement."

"This year, I believe we have the team to win it all," she said.

Besides keeping her hockey career alive after Liberty, Frescura has also ventured into coaching a "Learn to Skate" hockey development program for 4-15-year-olds with Lady Flames teammate and best friend Brooke Harris.

"As much as I love playing hockey, I also have found a love for coaching," Frescura said. "Brooke is a natural when it comes to instructing the kids and we have a lot of fun running the program together. You get to see the kids be super happy learning to play the sport they love."

That is therapy for Frescura, who works as an exercise testing specialist in the Neuromuscular and Neurometabolic Clinic at McMaster Children's Hospital in Hamilton, Ontario, during the day. There, she performs exercise, pulmonary, strength, and functional testing on patients dealing with mostly incurable mitochondrial diseases, muscular dystrophies, and myopathies. She is hopeful the clinical trials she is involved in developing soon will be approved to start treating patients with those life-altering degenerative diseases. 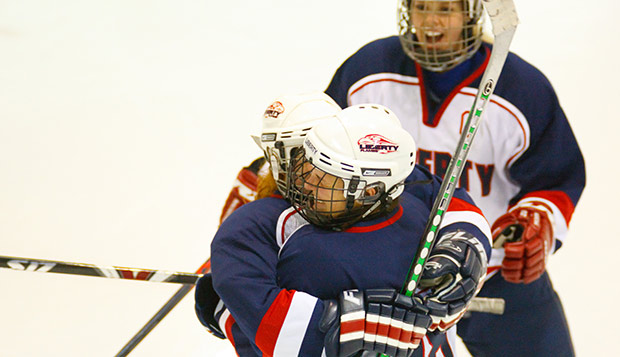 Kristin Frescura celebrates a goal with alternate captain Brooke Harris as team captain Sara Niemi looks on during a game played at the LaHaye Ice Center on Jan. 23, 2009.