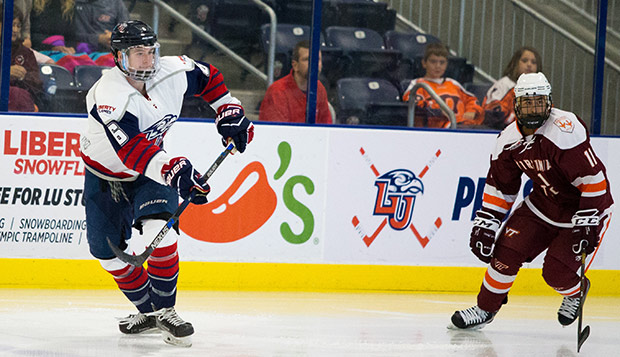 Freshman defenseman Kyle Martin follows through on a shot in the season-opener against Virginia Tech at the LaHaye Ice Center. (Photo by Jessie Rogers)

A seven-goal second period catapulted Liberty University's ACHA Division II men's hockey team to a 10-3 lead en route to a 13-5 triumph over Virginia Tech in the second game of the best-of-three "Battle of the Blue Ridge," Sunday afternoon at the Roanoke Civic Center.

Senior right wing Rob Ward scored the first goal of the first period and the last goal of the second, sophomore forward Drew Crilly netted a hat trick, and eight other Flames tallied one goal each to pace the attack, which equaled its output from Friday night's 13-1 victory over Stevenson (Md.) University's first-year ACHA Division II program.

"I was really proud of how the guys played," Liberty Head Coach Ben Hughes said. "We pressured them really well. Our focus going into the game was raising our competition level. We wanted to get two guys on the forecheck, establish pressure really well and continue to sustain it. Our guys were just motivated today to move the puck and shoot well. Our defensemen did a really good job of sending quick outlet passes to the forwards and, once they got the pucks, they were attacking the net and the zone."

"Our focus Friday against Stevenson was to build confidence," Hughes said. "We wanted to make sure we got a lot of shots and scored a lot of goals."

After forfeiting their season-opener against the Hokies at home, the Flames will seek to clinch the "Battle of the Blue Ridge" in the tie-breaking third meeting in early February back at the Roanoke Civic Center.

This Saturday at 10:30 p.m., Liberty (7-5) will conclude its Fall semester schedule by hosting Maryland in a rematch of a 5-4 loss Nov. 17 in College Park. The Flames will open the Spring semester by hosting Rowan, Louisville, and Stevenson in a six-game Division II Showcase from Jan. 12-14.