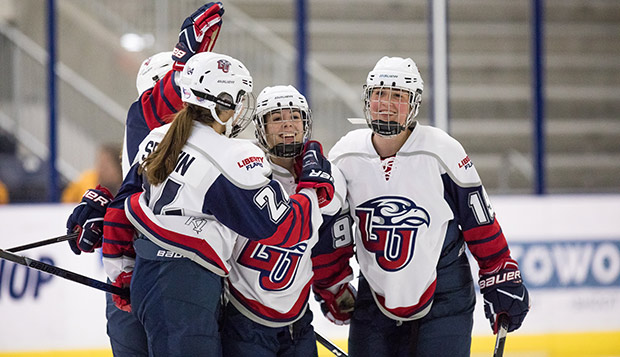 "We're at a good point in the season where we seem to be firing on all cylinders," Liberty first-year Head Coach Chris Lowes said. "We've got some speed and playmaking and strength in size and the special teams are coming."

Stellar goalkeeping from junior Kelly Hutton on Friday night and sophomore Nadia Rupoli on Saturday — who have the two lowest goals-against averages in the ACHA Division I — preserved the sweep for Liberty, which nearly finished the Fall semester unscored upon against ACHA competition at home. The Lady Flames outshot the Lakers 31-19 and Rupoli made 18 saves.

Saturday's rematch started very similarly to Friday's opener, with Lady Flames sophomore forward Alex Smibert scoring the only goal of the first period. This time, she put Liberty up 1-0 early on a rebound of a shot by sophomore forward MacKenzie Carroll from the inside edge of the right circle, finishing the loose puck past Grand Valley State goalie Lauren Allen in the left crease at the 17:27 mark.

"Smibert has had a hot hand," Lowes said. "She's scored our first goal in the last three games, including the one at Adrian. We've been challenging her a bit and she does some things that no one else can. She's dangerous and she wins those battles."

Two minutes into the second period, with the Lady Flames on the power play, Aly Morris controlled the puck in the right corner and sent a backhanded pass to fellow sophomore forward Lauren McDonald in front. Liberty's leading scorer put away the rebound of her own shot blocked by Allen in the left crease to give the Lady Flames a 2-0 cushion.

Three minutes later, senior forward Courtney Gilmour received a fast-break feed from freshman forward Shelby Bradford on the left wing and skated past Lakers defenseman Connor Denton before lifting a beautiful backhand into the upper netting to make it a 3-0 game. It was the first time Gilmour had played on the line with Bradford and sophomore forward Deena Birney.

"I think we really clicked this weekend," she said. "We only had two practices together, so I was a little nervous, but our line scored two goals today. They're a great bunch of girls to play with and they're really positive and made me feel welcome on their line, which was wonderful."

Midway through the third period, Gilmour sent a cross-ice outlet pass to Birney, who skated it along the right boards before feeding Bradford for a finish past Allen from out front for a 4-0 advantage.

Senior forward Chelsey Greenwood extended Liberty's lead to 5-0 with 5:48 to go when Carroll recovered the rebound of a shot from the right point off the stick of sophomore defenseman Dana McLeod. Carroll one-timed an assist from along the back boards to Greenwood in the right crease where she cashed in for the Lady Flames' final score.

Gilmour said Allen, who is 6-feet, 3-inches tall and athletic, was difficult to get the puck past, but the Lady Flames worked hard and capitalized on their opportunities.

"She's so tall and she has a very good glove, so just trying to get around her, with her leg span also, deking's hard and she's good up top," she said. "So we really had to get her moving side to side. One of our strengths is our cycle deep in their end, working it to the net, and that's what we really excelled on today We all played our best game and we just needed to keep them down low."

A turnover in the defensive zone with Liberty on the power play in the closing minute set up a shorthanded goal by Grand Valley State center Allison Lowe, whose shot in the slot beat Rupoli inside the left post, ending her shutout bid with 38 seconds remaining.

"It was disappointing to give up that goal on the power play with 30 seconds left, especially as good as Nadia played," Lowes said. "She looked dangerous tonight and they played us tough. She deserved (a shutout)."

The Lady Flames will conclude their Fall semester schedule next Friday at 7 p.m. and Saturday at 4 p.m. at Rhode Island, a team they shut out 7-0 on Nov. 3 at the UMass Showcase.