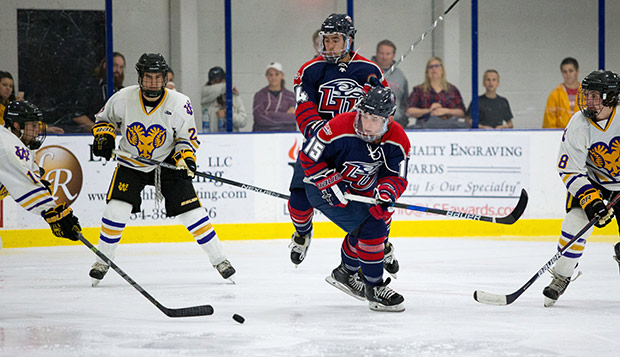 Playing in its final ESCHL contest of the Fall semester, Liberty University's ACHA Division I men's hockey team solidified its standing and continued its quest for the ESCHL regular-season title and automatic bid into the ACHA DI National Championships with a 10-2 triumph at West Chester on Friday night.

Giving up two early goals seemed to revive the Flames, who rallied for 10 unanswered goals to streak past the Golden Rams, 10-2, at IceLine Quad's Rink No. 3.

West Chester (4-12, 1-10-2 ESCHL) scored first five minutes after the opening faceoff on a goal by Steve McElroy and stretched its lead to 2-0 on Colby Yaller's sharp-angled shot off an assist from Alex Marino 1:15 later.

"The best thing was to see how our guys handled adversity tonight," Liberty Head Coach Kirk Handy said. "We were down 2-0 and I really liked the way were playing. We kept it positive and really battled, and in the second period played some of our best hockey of the season."

The Flames scored one goal at the end of the first period before adding five in the second and four in the third and outshooting the Golden Rams by nearly a four-to-one margin — 53-14 for the contest.

"We were more dialed in tonight and executed a lot better," Handy said, referring to Thursday night's 3-1 win. "We had a greater sense of urgency around their goal and were putting pucks on the net. We did a lot of things well tonight. It was a good effort and I was proud of our guys."

"Vic's been a catalyst for us all year," Handy said. "His energy and the way he plays is contagious."

Then in the second period, Liberty's top line scored on three consecutive shifts, sparked by sophomore forward Brock Thompson, who netted the equalizer five and a half minutes into the action off assists from senior forward Grant Garvin and junior defenseman Zane Schartz.

Liberty seized its first lead at 3-2 two and a half minutes later on the first of two goals by sophomore forward Quinn Ryan off assists from Thompson and Garvin. Ryan made it 4-2 in favor of the Flames around the game's midpoint before the floodgates opened wide over the final 22 minutes.

Liberty added two more scores in the final minute and a half of the second period — on freshman forward Jordan Bochinski's top-shelf finish for his 10th goal of the season, and sophomore forward and head captain Josh Hamilton's shot from the slot — to take a commanding 6-2 advantage 45 seconds before the second intermission.

After the break, the Flames got their second wind as Hamilton netted his second straight goal on a beautiful wrap-around shot. That increased the Flames' lead to 7-2 before sophomore defenseman Basil Reynolds' wrist shot assisted by Gammer and Blomberg made it 8-2.

Schartz stretched the Flames' advantage to 9-2 by firing through a screen in front of the net off assists from Fricks and senior forward Tim Bierema before sophomore forward Cody Clarke concluded the scoring unassisted with 2:22 to go.

"It was nice to see all of our lines score goals tonight, and we got some contributions from the back end," Handy said. "We rebounded well from the disappointing effort (Thursday) night, which wasn't to the standard we expect to perform. All the guys were going well tonight and I liked the way we played, especially in the second and third periods."

Those last two stanzas were reminiscent of the Flames' second-game rout of the Golden Rams on Sept. 23 at the LaHaye Ice Center, on the day after a Midnight Mayhem opener. Junior goalie Josh Halpenny shut out West Chester over the final 74 minutes.

Liberty will close out the Fall semester schedule next weekend with a non-conference series against Indiana University of Pennsylvania starting with another Midnight Mayhem matchup on Friday night.