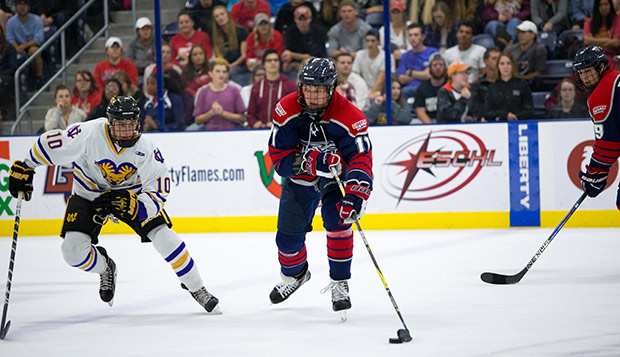 Flames freshman forward Sam Carlson controls the puck in front of a West Chester player in the teams' first meeting on Sept. 23 at the LaHaye Ice Center. (Photo by Leah Seavers)

"It was a tight game, a lot tighter (than we would have liked)," Flames Head Coach Kirk Handy said. "West Chester played well tonight. You have to give them credit. Their goalie made a lot of big saves."

Liberty (14-6, 12-2 ESCHL) was held scoreless for the first 12 minutes before sophomore defenseman Jacob Fricks capitalized on the first of the Flames' two power-play goals on the night. Fricks finished feeds from senior forward Victor Blomberg and freshmen forward Cole Gammer on an odd-man rush for a 1-0 advantage.

Senior forward Grant Garvin doubled Liberty's lead with its second power-play goal less than seven minutes into the second period by controlling a pass from Schartz and weaving his way through the offensive zone before putting away a rebound of his own blocked shot past Golden Rams goalie Breandan Colgan.

"It was a nice goal, but I felt like we needed to have a little more," Handy said. "We didn't play very well tonight. Maybe it was post-turkey (recovery). It wasn't a great effort."

West Chester (4-11-1, 1-9-2) trimmed the deficit back to a 2-1 by ending the shutout bid for junior goalie Cole Burack with just over a minute to play in the second period.

Liberty outshot the Golden Rams 27-10 on the night with Colgan making 25 saves and Burack repelling nine.

"He played really well for us," Handy said. "It was a big ESCHL game and it'll be another big one (Friday) night. It starts with me on down, we have to be better tomorrow."