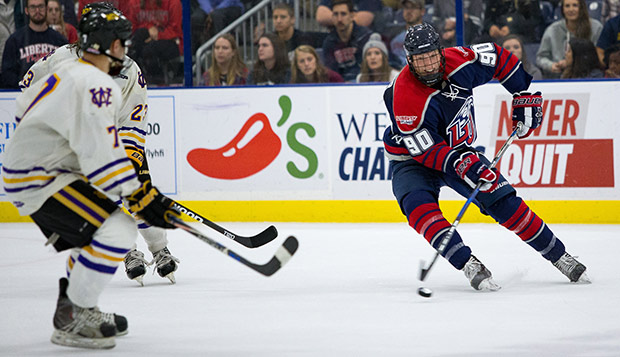 Freshman forward Cole Gammer works the puck against West Chester in the Flames' Midnight Mayhem clash with the Golden Rams on Sept. 23. (Photo by Leah Seavers)

A week off for Thanksgiving Break gave Liberty University's ACHA Division I men's hockey team time to recover from a string of recent injuries and to rest up after a grueling stretch of games against Ohio, Stony Brook, Delaware, and New York over the past month.

On Wednesday, the Flames travel to West Chester (Pa.) — a team they swept handily in a home series in September — for their last ESCHL series of the Fall semester.

"They're a different team than they were at the start of the season, and we're different, too," Liberty Head Coach Kirk Handy said. "From our standpoint, we are trying to progress with where we are as a team and continue on toward our journey of where we want to be at the end of the year."

The Flames are coming off a 1-0 overtime triumph on Nov. 18 at ESCHL newcomer NYU, where junior forward Zechariah Roberts netted the game-winner a day after Liberty let a 3-0 lead slip away in a 5-4 setback, its first road loss of the year.

"We want to get back on track here, finish the semester strong in the four games we have left," Handy said, including next weekend's home series against Indiana University of Pennsylvania. "We want to be focused on how we execute this weekend. In all areas, we want to continue to improve and to make sure that we play at our best."

Liberty scouting report: The Flames, who are in first place in the ESCHL South Division standings, have scored nearly twice as many goals as any other team in the league with 89 through their first 13 conference games. North Division-leading New York has netted 45. Liberty is 5-1 on the road this season, outscoring its hosts, 28-7.

Senior forward and alternate captain Grant Garvin has sparked the Flames' attack as their leading scorer for the third straight season, ranking first in the ESCHL and third in ACHA Division I with 13 goals and 23 assists (36 points).

He is followed closely by sophomore linemates Brock Thompson (14G, three game-winners, 15A) and Quinn Ryan (7G, 18A). Junior defenseman Zane Schartz (10G, 18A) ranks third in points (28) and first in power-play goals (eight) while freshmen forwards Cole Gammer (7G, 11A) and Jordan Bochinski (9G, 7A) rank fifth and sixth, respectively, in scoring.

With sophomore defensemen Garrett Nelson, Matt Cruickshank, and Josh Bergen sidelined by injury, the Flames will again travel with Jackson Roy — a sophomore call-up from the Division II squad — to solidify their DI defensive corps.

West Chester scouting report: After finishing in last place in the ESCHL last year, the Golden Rams are sitting in fourth place in the South Division standings, behind Liberty, Delaware, and Rutgers.

Brendan Colgan has started all but two games in goal, going 3-9 with a 4.09 goals-against average and an 89.1 save percentage.

Series record: Liberty leads the series 7-0 after winning all five of its meetings with West Chester last season, their first as ESCHL rivals. The Flames defeated the Golden Rams twice on Sept. 23 in the LaHaye Ice Center, by a 6-1 count in the semester's first Midnight Mayhem matchup and a 14-2 rematch later in the day.

Coaches: Handy is in his 18th season as the Flames' head coach and has compiled an overall record of 387-172-25. Eric Wolf is in his first season at the helm for West Chester and is off to a 4-10-1 start.