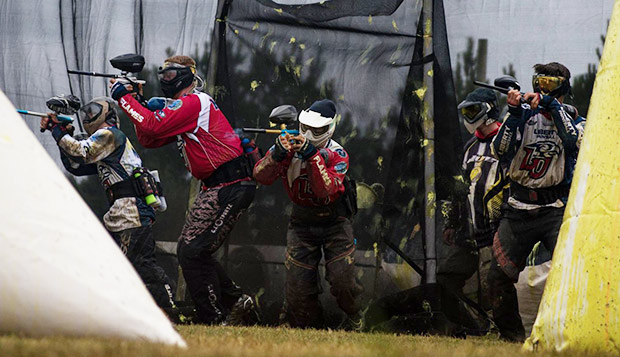 Flames players (from left) Corbin Ryan, Zach Moore, Jonathan Yeo, and Alex Kaspriak break out at the start of a point.

Liberty University's paintball team won all three of its matches at its Mid-South Collegiate Conference (MSCC) Class A event No. 1, Oct. 29 in Rock Hill, S.C., to start the season ranked atop the MSCC standings.

The Pirates provided the toughest test in Liberty's opening match as the Flames had to rally from three points down at halftime before tying it up in the second half and prevailing in sudden-death overtime.

"It was a very good start to the season, playing one of our toughest competitors and being able to pull out a victory," Davidson said.

The Flames played without graduate captain Christian Campbell, who was unable to make the trip.

"Christian usually keeps the team calm and collected and organized while they're playing, so it was good to see other leaders step up, like sophomore Kyle Babb and senior David Dickerson," Davidson said.

In the second-match victory against Kennesaw State, Davidson experimented with new lineup combinations in the one-sided match.

"We were able to beat them pretty dominantly so I was able to rotate in my secondary guys a lot, including some of the new guys who have never played this format before," he said.

"They're all first-year players and they were able to compete and excel against Kennesaw State in their first Class A event," Davidson said. "It was a very good experience for them playing in that format, and gave me confidence in the talent of the newcomers."

Liberty's match against Clemson started evenly with the two teams countering each other's attacks before the Flames caught their second wind.

"We were battling back and forth and were able to claw ahead and beat them in the second half, which was in our favor," Davidson said. "That gave us another opportunity for new guys to play with the seasoned players at that level of competition."

The Flames will host MSCC Class A Events No. 2 and 3 on April 7-8 at the Liberty Paintball Fields before sending its Class A and Class AA lines to the National Collegiate Paintball Association (NCPA) National Championships in Kissimmee, Fla.

"I feel comfortable going into next semester," Davidson said. "I see a bright future and a lot of potential for many of the newcomers, who are slowly working their way up to speed. Their hard work is paying off so far."