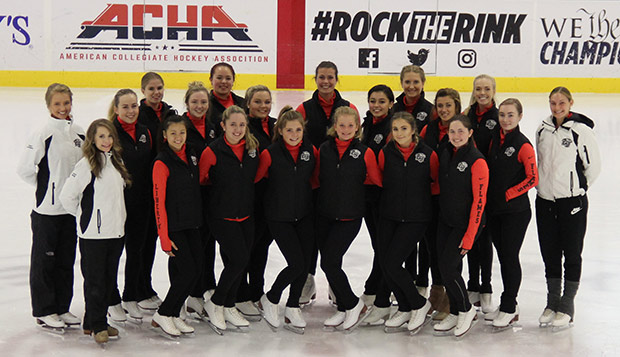 "We're really excited about what we can achieve together as a team," Lady Flames Head Coach Tatiana Payne said.

An influx of seven freshmen complement a solid corps of returning skaters to create a winning dynamic and great team chemistry, which Liberty's 16-skater formation put on display by performing its full four-minute routine during the first intermission of Liberty's ACHA Division I men's hockey team's Nov. 3 game against Stony Brook at the LaHaye Ice Center.

"The girls who are new to the team have blended in and meshed very well with the older girls who have previously been on the team," junior co-captain Katherine Thacker said. "One strength that our team has is all working together and working and skating as one unit."

"We have a lot of new girls on the team this year," Lady Flames freshman Emma Ockerman added. "We're a big melting pot of skills and it's awesome for everybody to come together and be able to show what we've got."