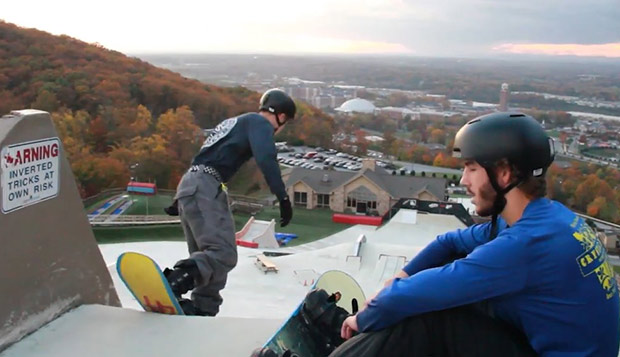 Though its season opener is still two months away, Jan. 21 at Beech Mountain (N.C.), Liberty University's ski and snowboard team is grooming several new members for the upcoming winter campaign when it will strive to maintain its edge on the Southeast Region competition and contend at the United States Collegiate Ski & Snowboard Association (USCSA) National Championships.

The Flames graduated their top snowboarders from last season, including Kevin Hoff, who has stayed on staff this semester, Brendan McHugh, and Austin Santos, but they return a strong corps of eight skiers led by Jonathan Wong and have recruited seven women's skiers and snowboarders to this year's roster.

"This year, we're looking to bring in some new talent and train them up," Liberty Head Coach Ryan Leeds said. "We're looking to do well at nationals. It might be a little bit of a growing year for us, but that's to be expected. We have some new talent that fits in really well, very experienced, so we're expecting a lot out of them on the national stage."

"Knowing the team dynamic, we have guys who have great camaraderie on the team and we're always pushing each other and encouraging each other," he said. "With that mentality, we're going to be able to continue to succeed across regionals and nationals because we have determination that other teams don't."