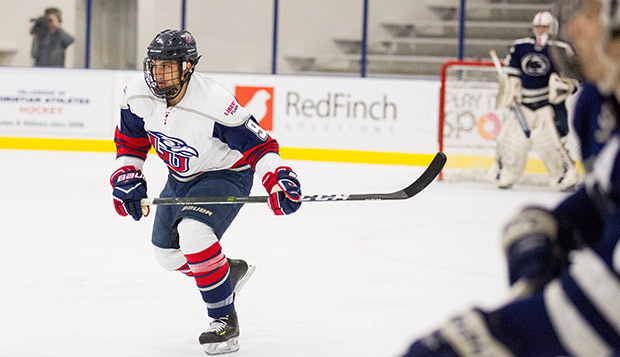 A day after outshooting host Maryland 46-28 in a 5-4 setback, Liberty University's ACHA Division II men's hockey team was outshot by Delaware by an even greater margin, 50-29, but rallied for a 4-3 victory at Fred Rust Arena in Newark, Del.

"We got away from our game a little bit this weekend," Liberty Head Coach Ben Hughes said. "Toward the end of the third period, the guys got a new sense of urgency and went back to the game we are capable of, playing to our strengths. It was a big win for us."

Junior goalie Blake Scott made 47 saves to rescue the Flames (7-3, ranked third in the Southeast Region), allowing them to stage the dramatic comeback win over the Blue Hens (11-6, ranked seventh).

"He made some great saves throughout the entire game," Hughes said. "He really kept us in it when we weren't playing our best."

Sophomore forward Jamie Crane scored Liberty's first goal off assists from sophomore forward Andy Clarke and senior right wing Sam Hisey before Delaware netted the next three goals to take a 2-1 lead by the end of the first period and extend it to 3-1 early in the second.

Freshman left wing Blake Flanders started the Flames' comeback by finishing an assist from senior forward Robert Ward with 13:44 left in the second period. But the score remained 3-2 for the next 22:30 before Crane recorded his second goal, tying it at 3-3 off assists from senior forward Marshal King and Clarke with 3:46 remaining in regulation.

Just 47 seconds later, senior forward Paul Lamoureux tallied the game-winner after Ward picked up a loose puck, skated outside the slot, and passed it back to Lamoureux for a wide-open one-timer in the slot past Blue Hens goalie Eric Birnberg.

In Friday night's 5-4 loss at Maryland, the Terrapins (9-6, ranked 10th in the Southeast) scored two third-period power-play goals to overcome a one-goal deficit.

"They went up 2-0 right away and it felt like we were playing catchup the whole game," Hughes said.

After Maryland scored its first two goals in a span of 90 seconds midway through the first period, Lamoureux and freshman forward Michael Niederer tied the game at 2-2 off primary assists from Flanders in the final five minutes of the first.

Following a scoreless second period, Terrapins forward Evan Yamaguchi scored the first of his two goals 43 seconds into the third before the Flames drew even on a goal by senior defenseman Ryan Sidun and seized a 4-3 lead on senior right wing Sam Hisey's score at the 12:19 mark. Yamaguchi tied it a minute and a half later before with Thomas Murphy netted the game-winner with 3:03 remaining in regulation

The Flames have a week and a half off before hosting Stevenson in a key Southeast Region matchup, Dec. 1-2 at the LaHaye Ice Center and traveling to Mid-Atlantic Conference South Division rival Virginia Tech on Dec. 3 at the Roanoke Civic Center.