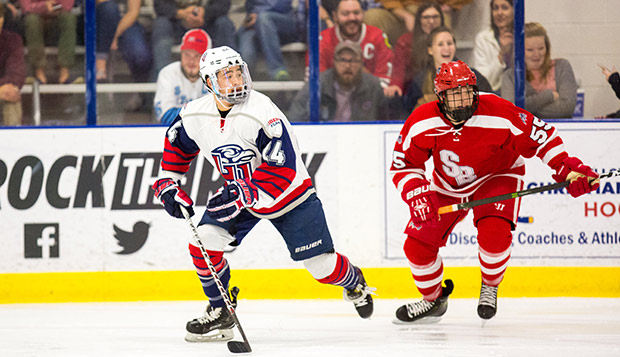 After a scoreless 60 minutes of regulation action in Saturday night's rematch with New York University, Liberty University's ACHA Division I men's hockey team escaped with a 1-0 win in overtime, in a defensive duel between ESCHL foes played at the Sky Rink at Chelsea Piers in New York City.

Flames junior goalie Cole Burack posted his third shutout of the season and junior forward Zechariah Roberts netted the golden goal with just 14 seconds remaining in the five-minute, sudden-death extra period to enable Liberty (12-6, 11-2 ESCHL) to salvage a split in its first series with the Violets (8-6, 6-6) at the DI level.

"It was an unbelievable battle tonight," Flames Head Coach Kirk Handy said. "Both teams were playing hard. And hats off the NYU, they are a good hockey team."

The Violets, who edged Liberty's Division II team 4-3 to claim their second ACHA DII National Championship in three seasons last March, rallyied from three goals down to eclipse the Flames, 5-4, in Friday's opener.

Handy challenged his defensive corps and they responded in a big way In Saturday's rematch, holding NYU without a goal on its home ice.

"I was happy because we had talked about being good in our D zone and that was solid for us tonight," he said, noting that the Thanksgiving break couldn't come at a better time with his lineup depleted by injuries. "(Division II defensive call-ups) Jackson Roy and Kyle Martin played well for us tonight, too, so that was nice to see."

The Flames' penalty kill unit contained the Violets' power play throughout the contest, and particularly at crunch time, shutting NYU out over six consecutive minutes with the man advantage to keep the game tied with 4:24 remaining in regulation.

"Our PK was fantastic tonight," Handy said. "We had to kill off a five minute major and a two minute minor and they had about a minute and 20 seconds of a five-on-three advantage. Our guys battled hard and were able to kill it off."

NYU outshot Liberty 36-29 and Burack made 36 saves to preserve the victory.

"Cole Burack was sensational for us tonight," Handy said. "He was the difference in the game. He made some big saves."

As the final minute of overtime wound down, the Flames went on the power play and capitalized for the game's only goal when Roberts was in the right place at the right time.

Junior defenseman Zane Schartz set up the game-winner with a cross-ice pass to sophomore forward Quinn Ryan, whose slapshot from the top of the left circle hit NYU's goalie in the chest.

"The puck bounced down and Roberts was right there at the side of the net to bury the rebound," Handy said.

The Flames return to the ice Nov. 30 and Dec. 1 at West Chester, a team they swept at home to open ESCHL play on Sept. 22-23, capped by a 14-2 triumph. Liberty will then welcome Indiana University of Pennsylania to the LaHaye Ice Center for the second "Midnight Mayhem" contest of the Fall semester on Dec. 8, followed by a 7 p.m. rematch on Dec. 9.