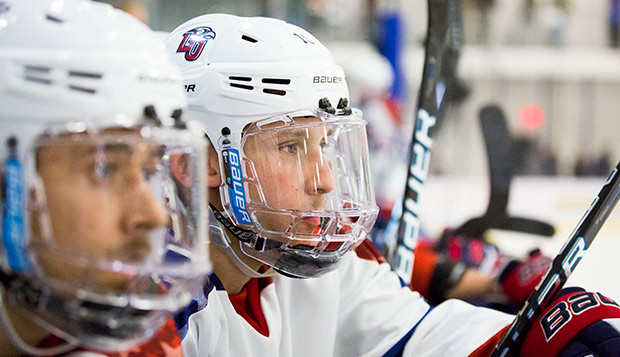 Liberty forwards Ryan Cox looks on from the bench in a recent game at the LaHaye Ice Center. (Photo by Jessie Rogers)

With a cruise ship docked on the Hudson River visible through the windows of Sky Rink at Chelsea Piers, Liberty University's ACHA Division I men's hockey team engaged in a turbulent, back-and-forth battle with ESCHL newcomer New York University on Friday night, eventually blowing a three-goal lead in a 5-4 setback.

The Violets, winners of two of the past three ACHA Division II National Championships, moved up to the Division I level after defeating the DII Flames last March in a 4-3 final that featured three lead changes. Friday's first meeting with Liberty's DI squad was somewhat similar as the Flames (11-6, 10-2 ESCHL) allowed NYU (8-5, 6-5) to score four consecutive goals over a span of just over 10 minutes to seize a 4-3 advantage early in the third period.

"Our D zone didn't have the effort that was needed," Liberty Head Coach Kirk Handy said. "We were lackadaisical back there and we can't be. It comes down to things we can control and that includes playing with a higher level of competitiveness and tenacity in the D zone."

With Liberty on a five-on-three power play, junior defenseman Zane Schartz — who recently became the 19th player (and second defenseman) to eclipse the 100-point mark in Liberty DI men's hockey history — scored the tying goal with a blast from the point past Violets goalie Adam Salisbury with 15:08 to play.

Liberty had what appeared to be the go-ahead goal waved off by the officials at the 5:06 mark when a Flames player pushed Salisbury into the net. The Violets recorded the game-winner moments after killing off a Liberty power play when Michael Conslato finished feeds from fellow forwards Mason Gallegos and John Kowalewski with 1:50 remaining in regulation.

"It was down across the crease and they buried it," Handy said. "We had our chances tonight, even when it was a tie game. We let a late power play expire and they capitalized at even strength."

Liberty got out to a slow start and was outshot by NYU 18-5 in the first period. Outstanding goalkeeping by junior Cole Burack kept the Violets off the scoreboard and the Flames tallied the period's only goal when junior forward Zechariah Roberts stole the puck in the offensive zone and fired it past Salisbury with 4:00 to go.

"I really didn't like our start," Handy said. "In the first period, we started out sluggish in all areas of our game and we were fortunate to have a 1-0 lead."

Freshman forwards Cole Gammer and Jordan Bochinski stretched Liberty's advantage to 3-0 in the second period, with Gammer's goal coming on a power play with 15:25 left and Bochinski receiving a long outlet pass from sophomore defenseman Basil Reynolds before putting away a breakaway.

However, when Liberty was unable to capitalize on its second power play, New York responded right away, pulling within 3-1 on Frank Horowitz's goal off assists from Alex Hopkins and Brandon Ritchey with 7:53 to go in the second.

The Violets trimmed it to 3-2 two minutes later when Conslato put away a pass from Gallegos before tying the contest at 3-3 just 1:20 after the third-period faceoff when Joey Abel scored off an assist from Parker Richards.

Less than a minute later, NYU went on a power play and seized its first lead at the 17:03 mark when Kowalewski converted off a pass from Hopkins.

Both teams finished the contest with 37 shots and Burack made 32 saves for the Flames.

"When you have a three-goal lead, you never want to let a team back in the game," Handy said. "Any game you score four goals, you should win. We need to focus on tomorrow's game. We will need a whole lot better effort than we had today."

Saturday night's rematch with the Violets, in the waterside arena not far from New York City's Madison Square Garden, is set for 8:55 p.m. It will be webcast live on LiveBarn's pay-per-view site.