No. 2 Lady Flames upset No. 1 Bulldogs for 15th straight win 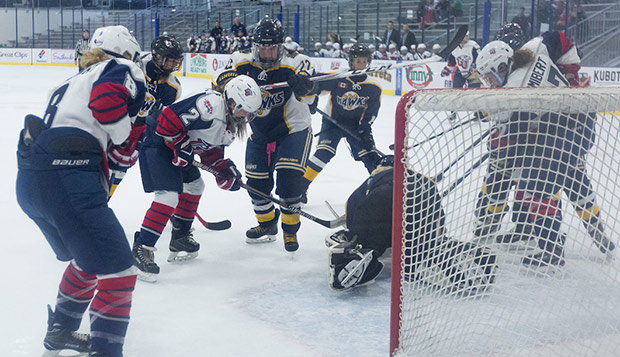 In a showdown between the No. 1- and No. 2-ranked teams in the nation, Liberty University's ACHA Division I women's hockey team scored three unanswered goals over the final 23 minutes of play to power past top-ranked host Adrian (Mich.) College, 4-1, Friday afternoon at the Arrington Ice Arena.

"It was a really fun weekend and a real good game to go into the (Thanksgiving) break with," Liberty first-year Head Coach Chris Lowes said. "It the best hockey game we've been a part of, not just because of how we played, but because of our opponent. They were a really good team — fast and physical, but disciplined. I liked the way we played. It was a pretty complete 60 minutes for us."

The Lady Flames (15-2, 13-0 ACHA) extended their winning streak to 15 games, including 13 on the road, while the Lady Bulldogs (9-1-1), playing on their home ice for the ninth time this season, lost for the first time. They had overtaken Liberty in this week's computer rankings by sweeping defending ACHA DI national champion Miami (Ohio) by 8-0 and 6-1 scores last weekend at Arrington.

Liberty capitalized on its second power-play opportunity with 24 seconds left in the first period when senior forward CJ Tipping started a fast break from behind her own cage before being tripped up near the top of the Bulldogs' left circle. She kept the play alive by tipping the puck while falling down before sophomore forward Alex Smibert picked up an Adrian clearing attempt and ripped a shot from inside the left circle that glanced off the glove of goalie Alison Dungey and trickled into the back of the net.

The Bulldogs netted the equalizer just nine seconds into a power play of their own with 7:39 remaining in the second period when defenseman Tara Wrbelis sent an entry pass to right wing Bittany Levasseur in the left crease, where she one-timed it past Liberty junior goalie Kelly Hutton.

At the 3:04 mark of the second stanza, Lady Flames freshman forward Shelby Bradford converted the game-winner off assists from freshman forward Kristi Serafin, who cleared the puck off the left boards, and sophomore forward Aly Morris, who dropped it back to her. Bradford skated through the left circle before lifting a wrist shot past defenseman Jessica Harrison and Dungey into the top corner of the cage.

Liberty maintained a 2-1 advantage for the next 18 minutes of play before junior forward Lauren McDonald, who had a hat trick in Thursday night's 5-3 triumph at Michigan, used her speed to skate past a defenseman for a one-on-one chance with Dungey. McDonald had her initial shot from the right crease blocked before controlling the rebound in the left crease and lifting the puck top shelf with 5:03 remaining in regulation.

The Bulldogs tried to dig themselves out of the two-goal deficit by pulling Dungey for the final 2:24, putting themselves on a man advantage. But the strategy backfired when Tipping's shot from beyond the red line glanced off a stick and skipped into the back of the empty net for the final score with 55 seconds to play.

"Last night, we needed Lauren (McDonald) to produce because we weren't really firing as a team," Lowes said. "Today wasn't really about individual performances. We played solid team hockey and defensively, we were very strong. It was a possession game, with a lot of play in the neutral zone, and it was about getting pucks deep. Our centermen played really well in our own end. It was a very solid hockey game."

Liberty only outshot the Bulldogs by a 27-18 margin with Hutton making 17 saves to secure the win.

Last Nov. 19, the fifth-ranked Lady Flames upset top-ranked host Adrian, 2-1 in overtime, before winning the rematch, 2-0, to overtake the No. 1 spot. They held that ranking until having their 15-game winning streak snapped by the RedHawks in the national championship game, March 19 in Columbus, Ohio.

Liberty returns to the LaHaye Ice Center on Dec. 1-2 after a well-earned Thanksgiving break to host ninth-ranked Grand Valley State. The Lady Flames lost their only matchup against the Lakers last year in Allendale, Mich., after defeating them to advance to the ACHA DI Final Four in 2016, a 2-1 semifinal loss to Miami in overtime.