Flames pad defensive lines ahead of series at NYU 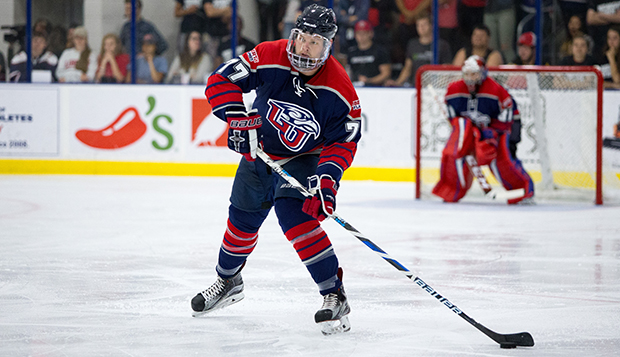 Sophomore defenseman Chaydan Lauber will return to the Flames lineup this weekend. (Photo by Leah Seavers)

Liberty University's ACHA Division I men's hockey team's defensive corps was depleted by injuries in the past two series against ESCHL opponents Stony Brook and Delaware.

Last weekend, the Flames completed their sweep of the Blue Hens with only four defensemen in the rotation, a contributing factor in their giving up seven goals — including five on the penalty kill and one on a power play — in Saturday's 11-7 series finale.

With the addition of Roy and Martin, and return of sophomore Chaydan Lauber, Liberty will have seven healthy D men in the mix for their first-series against the Violets at the Division I level. NYU joined the Flames in the ESCHL this season after defeating Liberty's DII team in last season's ACHA DII National Championship final in Columbus, Ohio.

Liberty will also have sophomore forward and head captain Josh Hamilton back in action after he missed more than a month with a knee injury.

"This is the time of the year where every team has guys getting injured and coming back in," Liberty Head Coach Kirk Handy said. "Our focus is on the guys who are in the lineup. Those guys have performed well for us and we're not worried about any of them. If they go in there and play to the best of their ability, they will all do just fine."

Liberty scouting report: The Flames, who remained at No. 12 in this week's ACHA DI rankings, are in first place in the ESCHL regular-season standings and the race for the autobid to the ACHA Division I National Championships.

Liberty has three players ranked in the top 15 among ACHA DI scorers and the top three in the ESCHL — senior forward Grant Garvin (13 goals, 22 assists), who ranks second in the ACHA and paces the Flames in scoring for the third consecutive season; sophomore forward Brock Thompson (14G, 15A, tied for seventh in ACHA), and junior defenseman Zane Schartz (9G, 18A, 13th in ACHA) who became the 19th DI Flames player and second defenseman to eclipse the 100-point mark for his career with his five goals in last weekend's series against Delaware.

New York scouting report: The Violets, who moved into the ACHA DI top 25 after sweeping Rutgers and splitting with No. 21 Syracuse, dropped back out of this week's rankings after being swept by Rhode Island at Boss Arena. They are 4-0 at Sky Rink, where they play nine of their final 14 games this season, while Liberty is 4-0 on the road with sweeps at Rutgers and Rhode Island.

NYU features balanced scoring with five players in double figures in points, paced by left wings Scott Mulligan (9G, 2A) and Michael Conslato (7G, 4A), and forwards Parker Richards and Steven Esposito (5G, 5A each).

All-time series: This the first meeting between the two teams at the ACHA Division I level.

Coaches: Handy is in his 18th season as Liberty's head coach with an overall record of 386-171-25. Chris Cosentino is in his eighth season at the helm of NYU and first at the Division I level after guiding the Violets to their second DII national championship in three seasons last year and posting a 139-66-8 record at the DII level.