Oakland battles back for 7-3 win 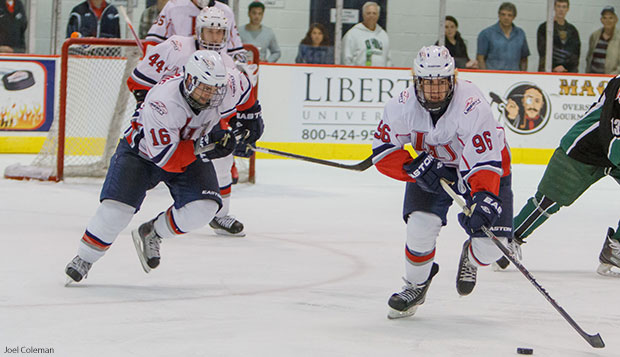 The Flames came out strong in the first period of play in game two with the Oakland University Grizzlies Saturday night, but weren't able to keep the momentum, handing the victory to Oakland 7-3 to break its seven-game losing streak.

The Flames put down the first points of the game, taking a 2-0 lead with goals from Andrew McCombe on a powerplay and Ryley Egan on a backhand from a rebound. Oakland struck back with two goals of its own, ending the period tied at 2-2.

Liberty's Rick Turner got the first goal of the second period, banking a shot off the Grizzlies goaltender from behind the net, picking up the one-goal lead. But Oakland powered back, putting in a goal on a powerplay and an even strength tally to take the lead at 4-3. The Flames were outshot 19 to 5 in the period.

Despite building steam and putting up 21 hits, the Flames went scoreless in the third period. Oakland forged ahead, putting up three more goals, one of which came on the powerplay, securing the win at 7-3.

Liberty won the first game in the series Friday night 5-3, coming off a win over Davenport in the first game on its three-game Michigan road trip. The Flames will get another chance to battle the Grizz when they host Oakland at home Feb. 8 and 9.

The Flames return to action next weekend when they host Stony Brook University in a two-game series Friday and Saturday.