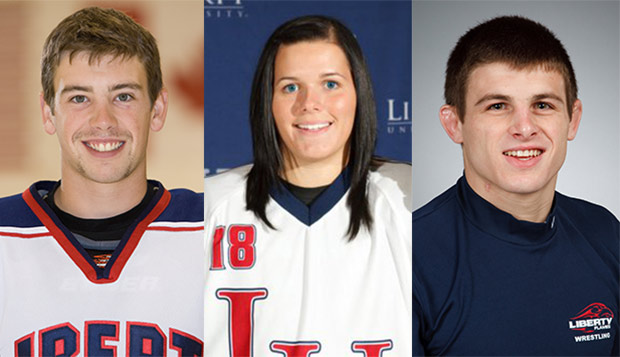 Liberty University's fourth class of its Club Sports Hall of Fame, to be honored at an induction ceremony on Dec. 8, will include Kyle Dodgson ('10) and Kristin Frescura ('11), the second-leading scorers in history for the Flames and Lady Flames ACHA Division I hockey teams, and Scott Clymer ('12), the first wrestler inductee.

Clymer was voted in on the first year he was eligible (after a five-year waiting period), after becoming the Liberty's first National Collegiate Wrestling Association (NCWA) individual national champion as a senior 141-pound wrestler. The Pennsylvania native finished that season undefeated in dual matches and was named the Mid-Atlantic Conference Wrestler of the Year. He helped lead the Flames to their first NCWA National Duals team title in Dalton, Ga., a No. 1 ranking in the final regular-season NCWA coaches poll, and a third-place finish at the NCWA Grand National Championships in Daytona Beach, Fla.

He graduated with a degree in Sports Management before serving as an assistant coach under Head Coach Jesse Castro for the 2012-13 season, helping the bridge the program to the NCWA ranks. He later went on to pursue a career in the sport of Mixed Martial Arts, winning his first three amateur matches in 2016 and his first professional bout on Nov. 3, with his next scheduled for Feb. 10.

Castro will be Clymer's presenter at the Club Sports Hall of Fame induction ceremony.

Dodgson played on four of the most successful teams in Liberty's ACHA Division I program history, all ranked in the top 10 in the nation at season's end. The Flames finished with a combined record of 109-38 over those four years, including 25-9 in his sophomore season of 2007-08, when they reached the ACHA DI Final Four for the first time. As a senior in 2009-10, Dodgson led the ACHA with 77 points and was selected as a first-team All-American for the first time since his freshman year in 2006-07, when he was also named to the All-Rookie team. He scored 100 goals and distributed 149 assists in 141 games for 249 points in his career, ranking behind only teammate Dave Semenyna, who was inducted into the second Club Sports Hall of Fame class in 2015.

A Huntsville, Ontario, native who played Junior "A" hockey there before Liberty, Dodgson graduated with a degree in Kinesiology in 2010 and went on to play two seasons of Senior-level hockey in Saskatchewan. He worked as a high school teacher before joining the Ottawa police force in August of 2016.

His presenter will be former ACHA DII player and coach Jeff Lowes, now an associate professor of Health Professions at Liberty.

Frescura, who will be presented by her father, Dante Frescura, scored 142 goals and distributed 84 assists for 226 points in 124 games over her four-year career to rank second behind only Carrie Jickling, who completed her fifth season of eligibility last season.

Frescura holds the Lady Flames' team record for the most game-winning goals with 24. She netted 53 goals and distributed 43 assists for a career-high 96 points as a freshman, when she led Liberty to a 25-7-1 record, its first ACHA DI National Championship tournament appearance, and a fourth-place finish. She scored a career-high 54 goals as a sophomore, setting a team record for most points in a game with 11 in a victory over Virginia on Sept. 27, 2008.

Frescura guided Liberty back to the ACHA DI tournament her sophomore and junior seasons, when the Lady Flames finished ranked No. 6 and No. 5 in the nation, respectively. The native of Canada earned a Bachelor of Science in Exercise Science in May 2011 and currently serves as an exercise testing specialist at McMaster Children's Hospital in Hamilton, Ontario.

The induction ceremony is set for 6 p.m. at Montview Student Union Alumni Ballroom, ending just hours before the Flames' ACHA DI men's hockey team hosts Indiana University of Pennsylvania in the season's second "Midnight Mayhem" contest in the LaHaye Ice Center. The inductees will be honored a second time during the first intermission of Saturday's 7 p.m. rematch against IUP.