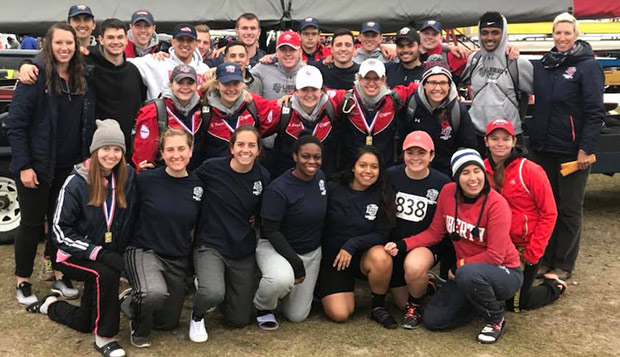 Liberty University's Women's Varsity 4 captured a gold medal in the Collegiate Club race to highlight the crew team's final regatta of the Fall semester, Saturday's Head of the South on the Savannah River in Augusta, Ga.

The victory was especially impressive due to the fact that the Lady Flames had to mix up their lineup with junior rower Daisy Wedge unable to compete. To fill her spot, senior Sarah Catto moved into the No. 3 seat, rowing on the portside rather than the starboard side of the boat. Senior Lydia Miller took over the stroke seat with freshman Sarah Nixon replacing her at coxswain. Junior Bailey Knecht and senior Allie Coughlan completed the crew as rowers.

"We reorganized the boat so to still to be able to win a gold medal was pretty amazing," Liberty Head Coach Debbie Prowse said.

Though the river was mostly shielded along its banks, the crews fought against a fairly strong headwind.

"We've been working on the catch into the stroke, getting the blades in the water efficiently, and really pushing into the wind on the backswings," Prowse said.

Liberty entered seven boats, the most it has brought to a regatta in three seasons, and placed 11th out of 31 college programs in the final team standings.

Nixon also coxed Liberty's Men's Varsity 4, which finished fifth out of 20 boats in 18:42.8. That crew was captained by junior stroke Spencer Barrett and rowed by junior Bradley Weisman and sophomores Ryan Krupanski and Gabe Shemeth.

Kasy and Pryor rowed in back-to-back races for the Varsity 8 and Novice 8 boats. Freshman Alexis Langteau was coxswain on the Novice 8 crew, which had six rowers in their first collegiate races.

With the weather not projected to be too windy or cold, Prowse was able to extend practices on Smith Mountain Lake through this week to give her novice team members as much water time as possible. She is mixing up varsity and novice rowers in boats this week to fine-tune technique and increase power in workouts that will help bring the younger rowers up to speed. After Thanksgiving break, the team will hold indoor erg workouts in their practice facility set up in the old Macy's building in River Ridge Mall.