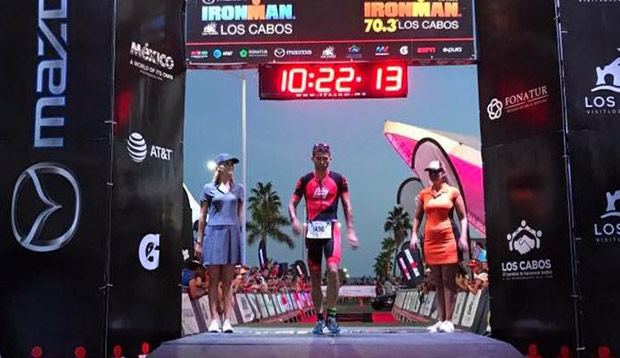 Parker Spencer crosses the finish line after the most brutal race of his life, Sunday's Ironman Los Cabos in Mexico.

Liberty University cycling, men's swimming & diving, and triathlon Head Coach Parker Spencer placed sixth in his 25-29-year-old age group and in the top 10 percentile overall (38th out of 388 finishers) at Sunday's Ironman Los Cabos in Mexico, located on the southern tip of the Baja peninsula.

Competing against a much smaller field than he faced in the Ironman 70.3 in Barcelona, Spain, last May, Spencer completed his first full Ironman in 10 hours, 20 minutes, 32 seconds. He narrowly missed the top-three cutoff in his age group needed to qualify for next fall's Ironman World Championships in Kailua-Kona, Hawaii.

"That was absolutely the most brutally hard day I have had in the sport," Spencer said. "My fitness was there, but I can honestly say I have never been that hot before. Racing in the desert is no joke."

The challenging course featured a 2.4-mile swim in the Pacific Ocean, a 112-mile cycling stage with 6,000 feet of elevation gain, and a 26.2-mile run on a relatively flat highway in extreme temperatures.

Spencer tried to stay hydrated by consuming a dozen 20-ounce bottles of sports drinks during the cycling stage and the equivalent of 16 more on the run, but still ended up in the medical tent receiving intravenous fluids after completing the course.

In addition to his competition, Spencer used the trip as an opportunity to connect with a couple potential recruits to his various endurance sports teams. He will welcome Jorge Andre Cabrera Silva, a professional triathlete from Mexico, for an official campus visit this week. Silva plans to enroll and begin competing for the Flames next Fall.

Silva is one of multiple international and American recruits who should strengthen an already-deep squad that expects to contend for the April 27-28 USA Triathlon Collegiate National Championship title in Tuscaloosa, Ala. Javi Lluch, a triathlete from Valencia, Spain, who won the European Championships, will bolster both the men's swimming and triathlon teams this Spring semester.

"He's one of the best in the whole world," Spencer said.

Lluch will be joined by Levente Lukacs, a pentathlete from Hungary who has switched to triathlon, and Giovanni Bianco, a graduate student from Italy who made his official campus visit in October.

The already-deep men's swimming team will become even more so with the addition of Noah Miller, a transfer from NAIA Olivet Nazarene University who will be the Flames' fastest in the 200 fly when he arrives in January.

"We really need additional butterflyers on the team," Spencer said. "That's the stroke where we're the thinnest and he will make a significant impact on the team."

Two students in Liberty's College of Osteopathic Medicine who swam at the NCAA Division I level during their undergraduate careers are also interested in joining the team for the Spring semester.