Wrestlers hold their own against NCAA foes at Fall Brawl 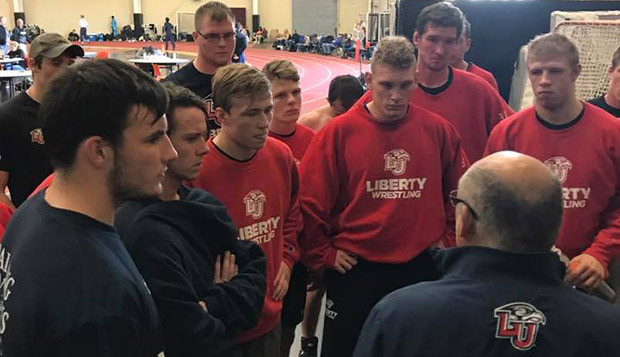 No team scores kept since it was an open tournament, but the Flames fared respectably well as one of only two NCWA entries (along with Mid-Atlantic Conference rival The Apprentice School) in a 12-team tournament that featured 10 NCAA programs.

"It was tougher competition than we saw at the Messiah Invitational tournament last weekend," Liberty Head Coach Jesse Castro said. "It was a good test for us and our wrestlers performed fairly well. A lot of our student-athletes won two or three matches, which was pretty solid at this tournament."

Karel went 5-1 at 174, winning his third-place final by medical forfeit over Delaware Valley's Anthony Costanza. He had pinned Worchester Polytechnic Institute's (WPI) Tyler Wilson in 2 minutes, 50 seconds before dropping a 5-4 decision to Navy's Hampton Boyd to slip to the consolation round. There, he went 4-0, scoring a 17-8 major decision over WPI's Mike Ilic before pinning Gettysburg's Sal Puglisi in 1:17 and advancing to the final with a 16-3 technical fall win over Chad Simmons from The Apprentice School.

Westlake finished 4-1 to take second place, losing only to the Naval Academy's Nick Mabry in the final, 6-0. He won his first match by forfeit before scoring an 18-2 technical fall over Cameron DiGiovanangelo from Camden County (N.J.) and a 4-1 decision over second-seeded Rocco Hladney of Elizabethtown, the NCAA Division III Wrestler of the Week, to reach the semifinals. There, Westlake earned an 11-0 major decision over Elizabethtown teammate Quinn Ruble to reach the championship bout.

Flames freshman Alex Hicks also competed well at 197, finishing 3-2 after being sent to the consolation bracket by Mabry with an 18-0 technical fall in the first round. Hicks went on to decision McDaniel's Jamie Rodriguez, 9-3, and Apprentice's Vandan Schmidt, 7-5, before needing just 54 seconds to pin Gettysburg's Michael Iodice before succumbing to a 36-second fall to host Ursinus's Charlie Wildermuth.

Scott had scored a 10-2 major decision over Keith before dropping to the consolation bracket with a 3-1 loss to Kowalski. He pinned Delaware Valley's Anthony Snyder in 3:47 and decisioned Camden County's Domenic DeMarco 11-4 before being pinned by York's Jesse Rocco in 1:10.

Flames senior co-captain Josh McIlhenny also went 3-2 at 184 pounds after losing his opening match to New Jersey's Daniel Surich. In the consolation bracket, McIlhenny pinned York's Jesse Huber in 5:42 before scoring a 4-1 decision over McDaniel's Ronald Mattox and a 12-4 major decision over WPI's Dan Wensley before being eliminated by Johns Hopkins' Isaac Morales by 11-3 major decision.

Senior Austin Amos, who wrestled at 197 pounds last season, went 3-2 at heavyweight, winning his first match by 3-2 decision over McDaniel's Brendan Woody before dropping his second-round bout to Gettysburg's Paul Triandafilou by the same score. Amos decisioned Camden County's Mark Gillis, 6-2, and Apprentice's Zach Sintobin, 4-1 in double overtime, before being eliminated by WPI's Austin Shrewsbury by 9-1 major decision in the consolation semis.

"(Shrewsbury) weighed 270 pounds and Austin did a good job with him," Castro said. "It was a fairly close match but it looked like David and Goliath out there."

Senior co-captain Dominick Johnson finished 2-2 at heavyweight, winning his first two matches by fall in 6:46 over WPI's Logan Mendelson and 5-0 decision over Ursinus's Ryan Kidwell before being knocked to the consolation bracket by losing a 5-2 decision to York's John Shorter.

Next weekend, Liberty will send split squads of 11 wrestlers to Saturday's Joe Parisi Open in St. Louis and about 10 more to Sunday's Star City Open in Roanoke.